Tesla Semi Shows Up In Iowa At Ruan HQ 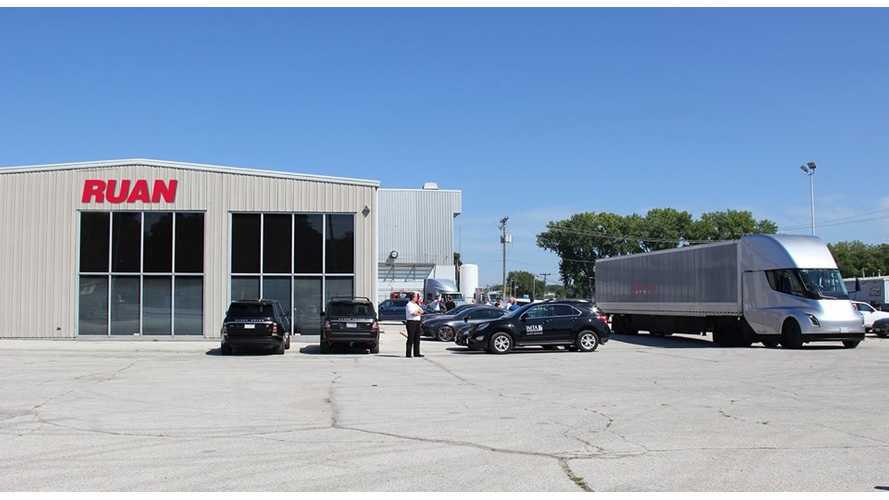 Tesla demonstrated the Semi to Ruan

Tesla continues its Semi tractor-trailer tour through the U.S. using the Supercharger network and one of the most recent stops was at Ruan, the transportation company that reserved five Semis.

"This week, representatives from Tesla Motors visited with Ruan team members and several customers for a viewing of the new, wholly electrically powered tractor-trailer."

Ruan would like to purchase the Tesla Semi as part of its sustainability efforts, but also notes Tesla's promise of a payback period of just two years (the price to be $180,000 vs about $100,000 for the diesel) because of low energy costs and high reliability. Not less important is its ability to recharge in 30 minutes for another 400 miles (in case of the 500-mile versions) at Tesla Megacharger stations.

Visiting customers as far as in Iowa, which is not that Supercharger dense, shows that the Semi runs just fine. Hopefully, we will not wait long for the second, redesigned version that is expected to enter production within two years.

“We are excited to have an opportunity to experience the new electric semis. The reservation of these vehicles is part of Ruan’s sustainability efforts and commitment to providing our customers and professional drivers with the best technology available,”.

“We will continue to be involved with the team at Tesla Motors as they introduce the trucks to the market. We will work with them directly to ensure the vehicles will serve us and our customers to the level we both expect.”