It has been an interesting year for electric vehicle sales with a January that was a bit disheartening, the longest reporting delay ever for February, and a March that rose to the top sales month of all time for the segment. April landed in the five-spot for all-time EV sales, but it was short-lived, as May arrived with a vengeance. May not only knocked April out of the top five, but actually snagged the four spot. If the trends continue, we should continue to see the final month of each quarter claiming the new lead spot on our all-time list, and June will likely prove this true. 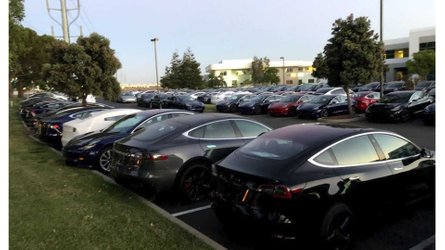 We have now put the second quarter of 2018 behind us, and what an amazing quarter it's already proving to be. Tesla caught us off guard by releasing its Q2 report in the wee hours of Monday morning, July 2, 2018. Taking this into account, along with the rest of our research, we estimate at least 27,000 plug-in cars were sold in June. However, hitting 30,000 isn't impossible. Just clearing the 27,000-mark will launch June 2018 EV sales to the top month of all time, historically.

While 2017 plug-in sales fell just shy of the 200,000 mark, it was still an amazing year for the segment. Hitting that mark for 2018 will happen well before the end of the year, especially since our chart has already eclipsed 100k deliveries and the coming months will be even better. However, there are several variables involved in determining where we might be by the end of this year. Nonetheless, sales exceeding 300,000 copies for the segment are expected.

While we don't have our Tesla U.S. delivery splits 100-percent sorted, our estimations for the month, the quarter, and the year are almost spot-on with Tesla's report. Additionally, our total Model 3 delivery number is only off by 9 units from the automaker's published numbers. We'll have more information on that in the coming days, as well as updated information about Model S and Model X sales and Tesla's 200k U.S. delivery status.

As usual, we expect most vehicles to sell better in the last month of the quarter than in the previous two months. However, although we are confident with our estimates, we've been in the dark about GM's actual deliveries over the past few months. Meanwhile, we do understand that Bolt sales have been down for a handful of reasons during which time we believe Volt sales have improved. Nonetheless, we don't expect to see huge numbers from GM for June.

Nissan may be hard-pressed to beat May's LEAF sales, being that the number proved the highest deliveries the car has seen since December of 2016. We can only hope that Nissan LEAF sales continue to improve or at least remain consistent around the 1,500-mark.

As far as the Toyota Prius Prime is concerned, it's anticipated that sales will be outstanding. Thus far, Prime sales continue to improve, and the end-of-quarter push has been solid. In May, Toyota sold more Prime plug-ins in the U.S. than it did to end Q1. We're excited to learn what June brings. Another record-breaker for the Prime is expected.

Like the LEAF, the Honda Clarity Plug-in Hybrid made great strides in May. We would like to report that June will be even better, but based on our estimates, that may not be the case. We hope that Honda can keep inventory up and stay on top of demand so that Clarity sales continue to improve. Hopefully, June's numbers prove our research wrong.

Stay tuned during the coming days as we put the numbers to all the dialogue. In parting, we'll leave you with some questions to ponder. If you have ideas for questions entering June, throw them in the comment section below and we'll make an attempt to work them in.