The first batch alreadythe hit UK in July, as the British market is the biggest for the model and requires a lot of volume in September (one of the two biggest months of sales). 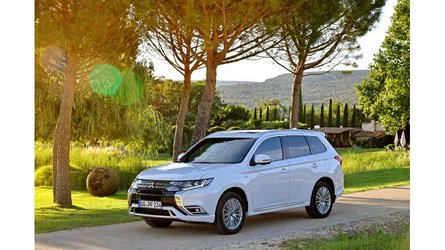 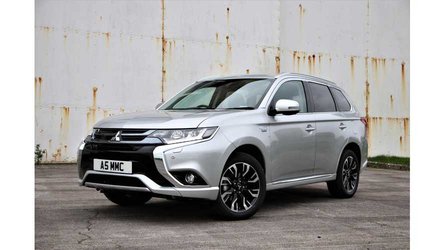 Mitsubishi says that there are a lot of improvements for 2019, however, the major one - 13.8 kWh battery instead of 12 kWh for up to 28 miles (45 km) in all-electric mode, according to WLTP cycle - is not a game changer for a car that is five and a half years on the market.

"The major improvements introduced in the new version accentuate further the EV flavor that distinguishes this model and improvements to 90 percent of the major component parts of the PHEV system by newly developed drive battery, engine, increased rear motor and generator outputs. These improvements give further improvements in the smooth and powerful acceleration inherent to its electric motor drive, and in its quietness. In addition, the model adds new SNOW and SPORT modes to its Twin Motor 4WD powertrain, making for a more reassuring and enjoyable driving experience."

Tokyo, August 23 2018 – Mitsubishi Motors Corporation today launched a new version of the Outlander PHEV plug-in hybrid EV featuring a more advanced PHEV system that gives this SUV a stronger EV flavor. The new model went on sale today at Mitsubishi Motors dealerships throughout Japan. Manufacturer's suggested retail prices range from ¥3,939,840 to ¥5,090,040 (inclusive of consumption tax).
The major improvements introduced in the new version accentuate further the EV flavor that distinguishes this model and improvements to 90 percent of the major component parts of the PHEV system by newly developed drive battery, engine, increased rear motor and generator outputs. These improvements give further improvements in the smooth and powerful acceleration inherent to its electric motor drive, and in its quietness. In addition, the model adds new SNOW and SPORT modes to its Twin Motor 4WD powertrain, making for a more reassuring and enjoyable driving experience.
Major Improvements
•  Improvements to 90 percent of the major component parts of the PHEV system that gives stronger EV flavor.
•  EV cruising range increased to 65.0 km (from 60.2 to 60.8 km; JC08 cycle);
•  S-AWC performance increased and two new drive modes added;
•  Driving quality improved with changes to dampers and steering gear.
I Product Overview
1. PHEV System Evolution
• Drive battery capacity has been increased from 12 kW/h to 13.8 kW/h. Rear motor and generator outputs have been increased by around 12 percent and 10 percent respectively. These improvements extend Outlander PHEV's all-electric cruising range from 60.8 km (60.2 km for S Edition and G Premium Package) to 65.0 km, and also see further enhancement in powerful drive delivers.
• Engine size is increased from 2.0L to 2.4L and high expansion ratio cycle (Atkinson combustion cycles) by change in cam profile and valve timing control allows high-efficiency power generation in the lower rev range. Also, the reduction in engine speed when in generating mode and optimization of generation output and, improvements to the air cleaner and main muffler reduces noise from the engine itself. The result is further enhancement in the feel-good driving experience that the electric drive delivers even when the engine starts and while running.
2. S-AWC System Evolution
• To cater more precisely to different road surfaces and vehicle operating status, SNOW and SPORT modes join the NORMAL and LOCK 4WD powertrain modes on the previous model.
• SNOW mode: Gives better stability and control over snow-covered and other slippery surfaces. LOCK mode has been tailored to cater more for poor road surfaces, giving higher levels of traction and more driver reassurance.
• SPORT mode: Gives the driver more direct control with improved throttle response and turning characteristics for greater enjoyment when sport driving on dry tarmac surfaces.
3. Improved Driving Quality
• Body rigidity has been increased with the use of structural adhesive and by increasing the panel joint overlap area in the front and rear doors, as well as the luggage compartment opening and the wheel house/body panel joins (areas using structural adhesive increased on S Edition).
• The use of larger front and rear dampers and a new type of damper valve gives improved ride quality as well as higher levels of handling and stability matching with smooth driving feel that the electric drive delivers (S Edition excluded).
• The use of a faster steering-gear ratio and optimization of the electric power steering control to match this gives better steering feel and quality and a more natural steering response.
4. Design
• Exterior: Appearance quality is improved with use of full LED headlamps and design changes to the radiator grille, LED fog lamp bezel, front skid plate, rear skid plate and alloy wheel. In addition, an aero-enhancing rear spoiler adds to the model's functionality and sportiness.
• Interior: Design changes to the ornament panels and hazard switch panel and functionality is improved with a new Power Display design which shows motor and engine outputs independently.
• Front seat hold is improved with a new seat side shape and the use of support cushioning with different firmness zones.
• Interior quality is further improved with the use of diamond quilt-pattern genuine leather upholstery on front and rear seats and trim, and this is complemented by laser-etched ornament panels (S Edition, G Premium Package).
5. Improved Comfort
• Rear cabin comfort is improved with a rear-facing AC vent fitted to the floor console.
• Convenience is improved with one-touch operation of all door windows from the driver's seat. All doors use anti-trapping windows for improved safety.
• Interior comfort during both normal and rapid charging is improved as audio and other electronic devices and the climate control system can now be used while charging.
6. Safety
All models come under the "Sapo S Wide"*1 safety classification – promoted by the Japanese government – as FCM front collision mitigation and UMS unintended acceleration mitigation systems (operates in both forward and reverse) are now fitted as standard for improved safety.
*1…Sapo Car (Safety Support Car) are vehicles fitted with advanced technologies that support safe driving. This is a new vehicle safety concept being promoted by the Japanese government (METI and MLIT) and designed to prevent traffic accidents and to mitigate injuries to drivers, particularly older drivers. Vehicles are classified as "Sapo Car" or "Sapo Car S (basic, basic + wide)" depending on the level of safety functions fitted.
II  Manufacturer's Suggested Retail Sales Price
(Consumption tax included; recycling cost, insurance, and taxes other than consumption tax or registration cost excluded.)