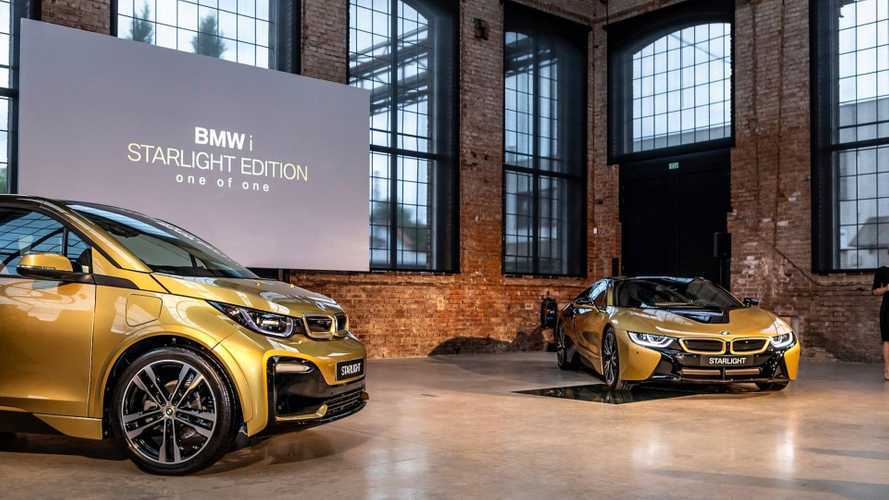 The good part is, these one-offs will be auctioned for a good cause.

Remember that matte gold Lamborghini Aventador from Canada? Seems like gold is in fashion these days as BMW just made their own golden version of the i3 and i8. However, if you think that gold can be limited to just color in cars, well, it’s not. In fact, the Bavarian marque put actual 24-carat gold onto the paint job of its electrified vehicles to create the BMW i3 and i8 Starlight Edition.

Now, why Starlight, you ask? When you look closely at the two cars, the gold dust is infused on to the body, from the front fascia down to the black rear end. The transition from gold to black is gradient, which emulates a sky full of golden stars. It’s a unique two-tone paint job, and we’re digging it.

What’s even better is that only one of each car will be ever built, which makes these extraordinary BMWs a rare collector’s item. Needless to say, these cars will come with a price, but BMW didn’t disclose how much exactly. What they said, however, is that these cars will be sold in a charitable auction supporting the Dagmar and Václav Havel Foundation VIZE 97.

For specs, the BMW i3 and i8 Starlight Edition are both based on the series models. The surface finish complies to BMW Group Czech Republic’s requirement in cooperation with Toplac – an official partner of BMW ColorSystem in the Czech Republic, which represents BASF paints producers. The 23.75-carat gold dust, which is the maximum for this consistency, is provided by Liebscher Blattgold GmbH. There are four layers of gold on both cars, with the last layer manually applied. Even the interiors are showered with gold, crowned by a plate with the words “STARLIGHT Edition one of one” on it.

The BMW i3 and i8 Starlight Edition will be on display in the Prague showroom of Invelt from June 21, 2018 onwards. Both cars will also appear at the Karlovy Vary International Film Festival on July 4-5.