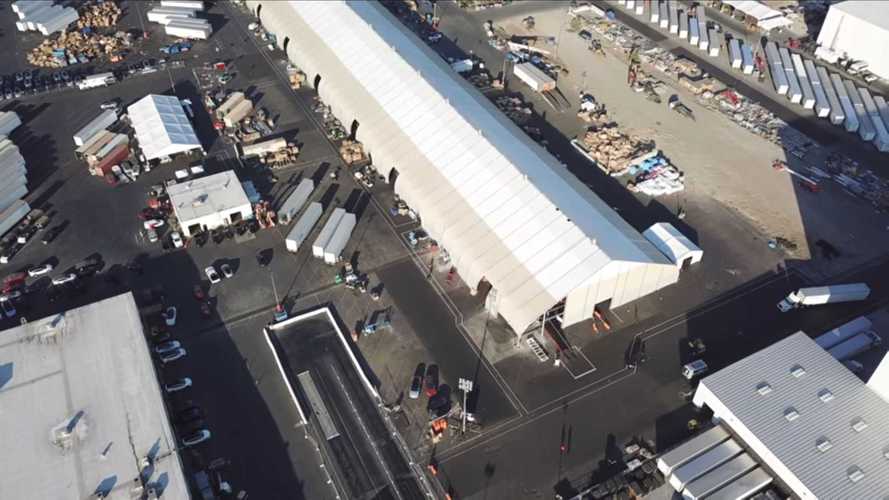 The road to the future runs through Fremont. Tesla has always been the leader of the EV revolution, and (despite the media nonsense about “Tesla-killers”) that isn’t going to change any time soon. Tesla’s future depends on achieving long-term profitability, and that depends on sustaining volume production of Model 3. So the burning question of the day is, what’s really going on at the Tesla factory?

Above: Model 3 surrounded by robots at Tesla's factory (Image: Teslarati)

Hoping to answer that question, two well-known auto analysts, George Galliers and Arndt Ellinghorst of the UK firm Evercore ISI, recently spent two days at Tesla’s Fremont plant, where they were granted extensive access to both the facilities and the company’s workforce (as reported by the Financial Times).

To date, very few outsiders have been allowed inside the so-called “tent” (actually a lightweight aluminum structure) where Tesla quickly erected a new Model 3 assembly line. Around a fifth of the Model 3 cars built last quarter came off this line. “Given the speed with which the facility was put in place and the associated capex, ignoring the building’s fabric, it looked very much like general assembly at other auto plants which we have visited,” said Galliers and Ellinghorst. Because this line produces only Model 3s, it is simpler than most auto production lines. “The production process involves only 43 steps/stations, 25-33% of the number found in traditional auto. This facility looks set to be permanent and in theory should be able to support much faster cycle times...Initial reservations around GA4 , which we voiced in July, were quelled during our visit.”

However, not all is running smoothly. “Model 3’s Body Shop and highly automated GA3 General Assembly were extremely interesting given the level of automation attempted and the density of the machinery and limited floor plan which they seemingly occupy. However, while Body Shop line rates were sub 65 seconds at several stations, based off our measurements, and we saw evidence of GA3 3-shift volumes consistent with what the company has guided for, we witnessed stoppages and downtime on both lines. It was not clear how much of the downtime related to scheduled breaks and maintenance vs. unscheduled problems.”

“Given red Andons , it seems that both lines do continue to suffer teething and calibration problems, though not problems which would prevent Tesla from reaching its near-term production targets.”

Quality control, especially inconsistent panel gaps, has been a troublesome issue for Model 3. According to Messrs. Galliers and Ellinghorst, Tesla has made progress in that category: “Panel gaps (chassis build quality) seems to have improved notably and, according to Tesla employees (that have worked at premium brands), are on par with German premium cars. Our subjective impressions confirm that the gap to BMW, Audi, and Mercedes is definitely less pronounced than it was in the past.”

The number of vehicles being taken off the line for rework has been another issue. “One thing which surprised us was how ‘clean’ the bodies of the vehicles looked before paint. We saw very limited, almost no, evidence of markings on the bodies in terms of inconsistent coloring, textures or tones. Scuffing was not visible or prevalent. We had expected to see more evidence of scuffing. Of course, this does not mean that there were not vehicles, pre paint, which had been set aside for rework. There were. However, the issues were not obvious or visible to us.”

As Elon Musk has said many times, every Tesla vehicle is subjected to a barrage of quality checks. “At the end of the welding process, the chassis gets a 200-300 spot laser quality check, similar to other OEM body lines we have seen,” write Galliers and Ellinghorst. “Andon boards were triggered on several occasions; a good sign we understand as it confirms quality checks are taking place and active. Labor management seemed ‘enabling’ with teams provided with areas and tools to monitor and address potential problems. Within GA3, nearly every workstation appeared to have access to a computer and monitors while similar setups were frequent within GA4. We observed employees checking and examining screens frequently across both lines. This behavior looked unprompted from our vantage point.”

The analysts noted that Tesla constantly collects data about the production process to help it improve. “One important takeaway, which we believe is differentiating at Tesla, is that one of the first steps completed in Assembly is to fit an onboard computer/chip. Every part subsequently fitted to the vehicle is recorded by the vehicle’s computer. As a result, the vehicle has a full record of every part fitted, when it was fitted, and various other measures of importance during the fitting process (e.g. torque applied when it comes to fitting parts during assembly). This provides Tesla with a feedback loop for continuous improvement.”

So, what do Galliers and Ellinghorst think about the big question: can Tesla sustain, and hopefully increase, its production rate? “Based off our tour and what we saw, we see no reason why Stamping and General Assembly should not be able to handle today, and even potentially 10k units, with very little incremental Capex. We believe the same is also true for the Paint Shop when it comes to reaching 8k units a week, with some incremental capex potentially required to get to 10k units.

“For Body, our understanding is that incremental capex is required (our impression is in the tens and not hundreds of millions) in order to get to both 8k units and eventually 10k units. While certain parts of the line are able to handle these volumes today, other sections will require improved design to achieve faster run rates while, in a handful of instances, it may be necessary to have a second line running in tandem.”

Above: Model 3 production ramping up at Tesla's factory (Image: Teslarati)

As the Financial Times notes, for Tesla to achieve Musk’s goal of producing a million cars a year by 2020, it may not be necessary for the Fremont factory to build 10,000 cars per week if the planned Chinese Gigafactory is in operation by then.