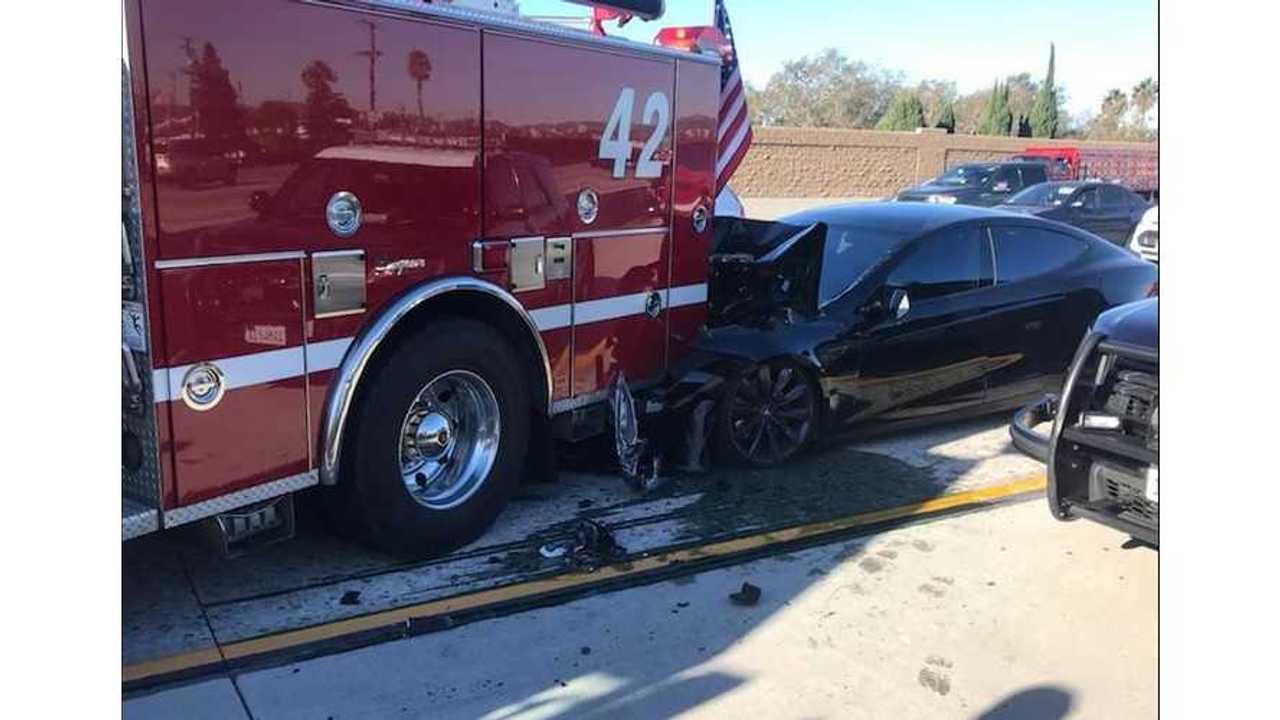 The crash resulted in two injuries. No firefighters were hurt.

As is often the case in these accidents, the Tesla driver is claiming autopilot is to blame.

This is the now the third accident involving a fire truck and a Tesla this year alone. Back in January, a Tesla Model S hit a fire truck in Culver City, followed by a similar incident in San Jose just a few months later. This week, a Tesla Model S crashed into yet another fire truck in San Jose, leaving two injured and a driver in custody on alleged DUI charges. All accidents where a Tesla hit a fire truck - including this one - were reportedly purported to have occurred while the vehicle was on autopilot. Remember, however, automatic braking systems are not designed to stop for stationary objects. According to Tesla:

Traffic-Aware Cruise Control cannot detect all objects and may not brake/decelerate for stationary vehicles, especially in situations when you are driving over 50 mph (80 km/h) and a vehicle you are following moves out of your driving path and a stationary vehicle or object is in front of you instead.

This particular accident happened around 1 AM Saturday morning on Southbound Highway 101 near Coyote Creek. San Jose Firefighters were responding to an accident on the scene when a black Tesla rear-ended one of the fire trucks. The crash resulted in the two passengers that were in the car to be taken to the hospital. Currently, we haven't received an update on their condition. On the other hand, the firefighters were fortunately left uninjured from the incident.

The firefighters took to Twitter to vocalize their concerns about a Tesla rear-ending one of their fire engines again:

TESLA near miss! For the 2nd time in recent months SJ FF’s escaped serious injury as a @teslamotors “Zero Emissions” vehicle slammed into the back of a #SJFD FireEngine @ 70 MPH on Hwy 101 at 1am – Reportedly the vehicle was in auto mode but auto braking system was not engaged. pic.twitter.com/gDQzXrFZ5S

Even though the driver claimed that he “thought the Model S was on Autopilot," he was arrested later on under suspicion of drunk driving and taken into custody. According to a now-deleted article by NBC, the police report makes note that Tran (the Tesla driver) blamed Autopilot when talking to the police officers.

“Tran told officers “I think I had auto-pilot on,” but it was unclear whether the Tesla was in self-driving mode when it crashed into the firetruck. The collision sent Tran and his passenger, 26-year-old Yorleyda Londono of Monterey, to San Jose Region Medical Center with minor injuries.”

When Electrek contacted Tesla about the accident, and the company responded with the following statement:

“Tesla has not yet received any data from the car, but we are working to establish the facts of the incident.”

A lot remains unknown about the incident in question. Furthermore, the DUI charge may lead the investigation in a completely opposite direction than the Autopilot claims made by the driver.