Check Out This Jay Leno Story: A Tesla Fan For Life 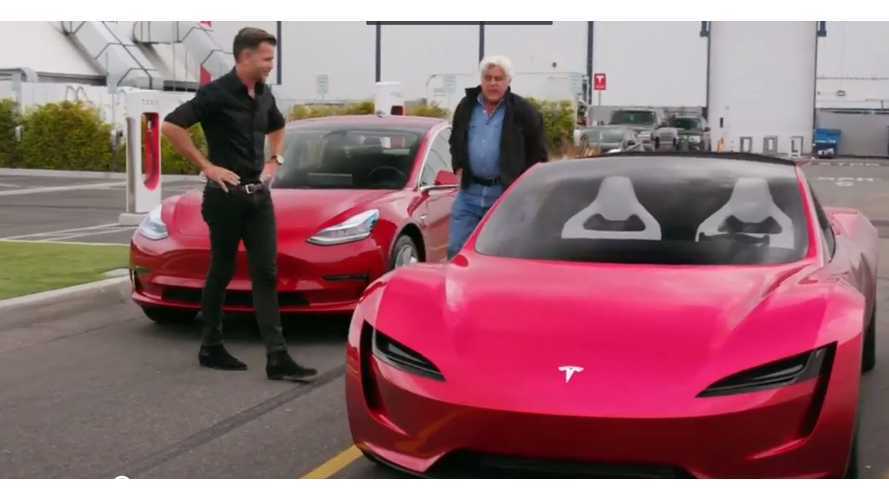 WHAT DOES JAY LENO REALLY THINK ABOUT TESLA?

"I'll take it," screams Jay Leno as he races down the street in a new Tesla Roadster with the company's chief designer, Franz von Holzhausen. Leno clarifies, "I'll buy it!" It turns out this isn't the first time Franz and Jay have met one another. Back in 2012, the two connected in order to discuss (and showcase) Tesla's first flagship sedan, the Model S, on Jay Leno's Garage. And over time, Leno has become a big fan of the Silicon Valley automaker.

More About Jay Leno and Tesla:

Jay Leno Says Americans Should All Root For Tesla - Video

Leno already owns a Tesla Model S. And in the latest episode of Jay Leno's Garage, Teslarati reports, "Leno’s Tesla visit began with a brief test drive of the Model 3. Leno was largely impressed with the electric sedan, stating that the smaller car 'feels exactly like a Model S.'" High praise from the car aficionado.

Above: Franz and Jay talk about the Model 3 and new Tesla Roadster (Image: Teslarativia CNBC)

From there, the segment moves to the forthcoming Roadster which is slated for launch in 2020. Beforehand, Leno had driven the original version of the Roadster which Tesla had launched way back in 2008. “I’m driving the past so I can look at the future,” Leno explains. Teslarati notes that Leno compares the new Roadster's "top speed to that of a fighter jet and the car’s quarter-mile time to that of a purpose-built drag racer."

Over the years, Leno has grown increasingly appreciative of Tesla's mission and its CEO Elon Musk. He's appeared on CNBC a number of times to discuss Tesla. He's called Elon Musk a modern day "Thomas Edison or Henry Ford." He's thrown his support behind Tesla's Autopilot as an important advance in vehicle safety. And Leno has also defended the company against unfair treatment in the media.

In any event, to get a better sense of what this automotive expert really thinks of Tesla, check out this round-up of Tesla-related segments featuring Jay Leno...

Leno on the new Roadster and Model 3

How Leno came to buy a Model S

Leno's intro to the Model S