Jay Leno takes a spin in the quickest car ever made

The fame surrounding the 2020 Tesla Roadster is unbelievable for a car that is yet to see the light of day. Everything that was shown to the public so far has been part of the Tesla testing fleet and we're still a year (at least) away from seeing it live.

However, some lucky individuals are getting a chance to experience the sheer brutality of the Roadster first hand - even before its official launch date. One of them is no other than Jay Leno.

More about the Tesla Roadster 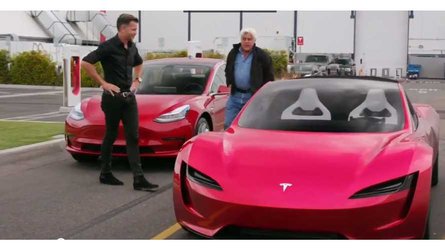 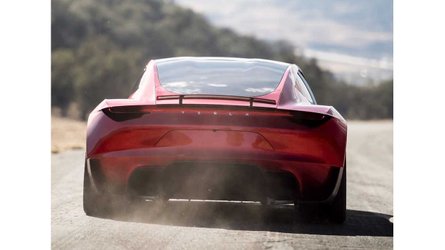 Jay is a comedian, he is an actor, producer, writer and television host. But, he's also a die-hard petrolhead. Leno started hosting the NBC's The Tonight Show with Jay Leno back 1992. Then, beginning in September 2009, Leno started a primetime talk show, titled The Jay Leno Show, which aired weeknights at 10:00 p.m. ET, also on NBC. After some controversy, some problems with Conan O' Brien and the usual drama going behind the scenes at pretty much every TV network out there, Leno hosted his last episode of The Tonight Show on February 6, 2014, slowly heading for semi-retirement.

But, Leno being Leno, he couldn't stay still for long. Owning approximately 286 vehicles (169 automobiles and 117 motorcycles), it was only natural to start his own car show. Titled Jay Leno's Garage, this week's episode brings us a true electric car treat. Leno was invited to Hawthorne, California in order to meet up with the Tesla chief designer, Franz Von Holzhausen.

The 2020 Tesla Roadster is more like a fighter plane. #JayLenosGarage pic.twitter.com/LjgtMESQ8d

Having owned the first Tesla Roadster, Leno gets a chance to witness the out-of-this-world acceleration and performance of the 2020 Tesla Roadster first hand. While we only get a small teaser from the video below, some things are clear about the Roadster: it's a gorgeous car, it's an aggressive looking car and it can bend time and space, putting its tires into a state of sheer horror. It also seemingly has a special ability to put a wide grin on everyone driving it.

Grab a video of Jay visiting Tesla right above.