Jaguar E-Type To Go Electric As Concept Gets Production Nod 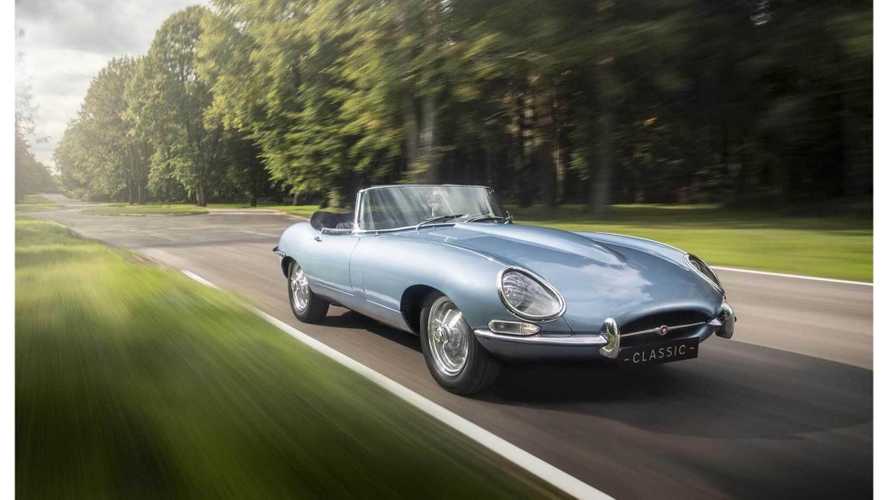 The classic roadster loses its inline-six engine in favor of an electric motor and battery pack.

Jaguar will put its E-Type Zero concept into production with deliveries beginning in the summer of 2020. The company's Classic division will build them to order, including converting interested owner's cars to the EV drivetrain. To celebrate the big announcement, Jag will have its latest concept for the zero-emissions model on display during Monterey Car Week.

"We’ve been overwhelmed by the positive reaction to the Jaguar E-type Zero concept. Future-proofing the enjoyment of classic car ownership is a major stepping stone for Jaguar Classic," Tim Hannig, Jaguar Land Rover Classic Director, said about the EV.

The British automaker won't yet release final technical specs or pricing for the E-Type Zero. At least on the concept, the roadster uses a 40-kilowatt-hour lithium-ion battery pack that allows for a range over 170 miles (274 kilometers). Acceleration to 62 miles per hour only takes 5.5 seconds, making the EV a second quicker than the original. The updated powertrain also weighs 176 pounds (80 kilograms) less.

The electric motor is up front, and a new driveshaft sends the output to the existing rear differential. Installing the electric powertrain doesn't require modifying the car's structure, so owners can put the classic inline-six back into the engine bay if they ever change their mind about the EV setup.

The only aesthetic change is the addition of LED headlights.

Inside, Jaguar Classic fits a new digital instrument cluster and an optional modern looking infotainment display at the center of the dashboard. Since the electric powertrain uses a single-speed transmission, the standard gearshift is gone, and in its place, there's a rotary dial.

You might recognize the E-Type Zero from its appearance at the royal wedding between Prince Harry and Meghan Markle. The couple drove away from Windsor Castle after tieing the knot.

Prospective clients invited to contact Jaguar Classic with expressions of interest via:

(Ryton-on-Dunsmore, 24 August 2018) Following an overwhelmingly positive reaction to the original concept for ‘the most beautiful electric car in the world’, Jaguar Classic has confirmed it will offer all-electric E-types for sale. The news follows the iconic EV sports car’s successful debut in concept form at Jaguar Land Rover Tech Fest in September 2017.

Combining its restoration expertise with cutting-edge technology from the Jaguar I-PACE, the award-winning zero-emissions performance SUV, Jaguar Classic will offer tailor-made E-types restored and converted to electric power at the same Classic Works facility as its outstanding E-type Reborn restorations in Coventry, UK.

An EV conversion service for existing E-type owners will also be offered. To preserve the authenticity of the base vehicle, the EV conversion will be fully reversible.

“E-type Zero showcases the incredible heritage of the E-type, and the expertise and craftsmanship at Classic Works, while demonstrating Jaguar Land Rover’s dedication to creating zero emission vehicles across every part of the business, including Jaguar Classic.”

The Jaguar E-type Zero concept not only driv outstanding performance, with quicker accele es and looks like an E-type, it also offers ration than the original Series 1 E-type.

Jaguar Classic is targeting a range in excess of 170 miles for all-electric E-types, helped by the car’s low kerb weight and sleek aerodynamics. The concept is powered by a 40kWh battery, which can be recharged in six to seven hours, depending on power source.

Apart from its state-of-the-art powertrain, modified instrumentation and fascia showcasing the latest touchscreen infotainment (which will be available as an option), the E-type Zero concept is largely original. Efficient LED headlights complement the iconic Series 1 design.

An electric powertrain with single-speed reduction gear has been specially designed for the E-type, utilising many Jaguar I-PACE components. Its lithium-ion battery pack has the same dimensions, and similar weight, to the standard E-type’s six-cylinder petrol XK engine and is in the same location.

The electric motor lies just behind the battery pack, in place of the E-type’s gearbox. A new propshaft sends power to a carry-over differential and final drive.

Using an electric powertrain with similar weight and dimensions to the outgoing petrol engine and transmission means the car’s structure, including suspension and brakes, has not changed, simplifying the conversion and keeping the driving experience in line with the original vehicle. It drives, handles, rides and brakes like an original E-type with front-rear weight distribution unchanged.

The latest iteration of the E-type Zero concept, finished in a Bespoke Bronze paint finish, will give the car its US debut at The Quail: A Motorsports Gathering on Friday 24 August.