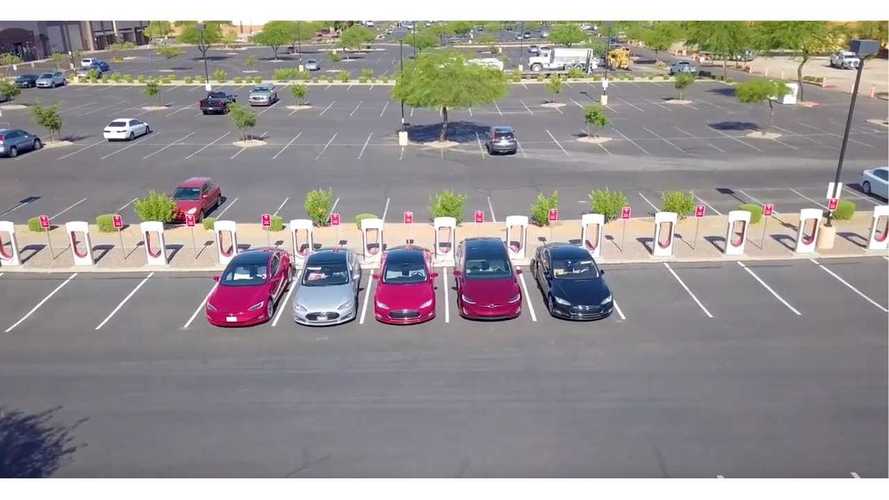 We started the drive from Phoenix on Friday, May 25th in the morning. Soon after departing, we came across another car club consisting of mostly Camaro's — interesting to say the least. After charging in Wickenburg and Kingman, Arizona we made it to Las Vegas in the afternoon. Once we arrived we had a group dinner at the Lazy Dog Restaurant while we charged our vehicles at the Town Square Tesla Supercharger just across the parking lot.

We Hitched A Ride With The Tesla Model 3 Road Trip

*This article comes to us courtesy of EVANNEX (which also makes aftermarket Tesla accessories). Authored by David Lucht. The opinions expressed in these articles are not necessarily our own at InsideEVs.

On Saturday morning, the team at the Tesla Showroom welcomed us with refreshments and gave us a tour of the facility. This large free-standing building contains a showroom, service center and delivery center all in one location. A Tesla Energy Advisor gave us a demonstration of Tesla's fully-integrated energy ecosystem. We also handed out gift bags provided by EVANNEX to our members and the Tesla Team. One of the cool items in each bag was the book Getting Ready for Model 3 by Roger Pressman.

Above: Driving up to the impressive Tesla facility in Las Vegas and receiving some swag from EVANNEX inside the store (Source: Tesla Drivers Club)

Parked out front of the Tesla Showroom, we had all red cars on display featuring at least one of each — Model S, Model X, and Model 3. A Tesla Drivers Club member demonstrated the summon feature with their Model S. We also gave test drives in a Model 3 that was rented on the Turo car rental marketplace. Members that were approved on Turo were fully-insured to test drive the vehicle on their own.

Above: Members parked their Teslas out front and some offered test drives (Source: Tesla Drivers Club)

Above: A Tesla road trip for a good cause (Source: Tesla Drivers Club)

Afterward, we took a ride on the High Roller Observation Wheel just after sunset. Within 15 minutes we were 550 feet above the Las Vegas strip with 360 views of the city. Currently, this is the world's tallest Ferris wheel.

Above: Teslas parking in front of the iconic High Roller Observation Wheel as the sun goes down (Source: Tesla Drivers Club)

Sunday was our last day in Las Vegas. We made the one hour drive up to Mt. Charleston and had lunch with Rufus Perry and some of his members of the Las Vegas Tesla Owners Group at the Mt. Charleston Lodge. At just over 7,700 feet elevation, it was only 42 degrees and raining compared to 90 degrees and sunny when we left Las Vegas at 2,000 feet.

Above: Pulling up to the Mt. Charleston Lodge and getting a bite to eat (Source: Tesla Drivers Club)

Afterward, we headed to the Hoover Dam for a tour and then made the 6+ hour drive back to Phoenix.

Above: Checking out the Hoover Dam (Source: Tesla Drivers Club)