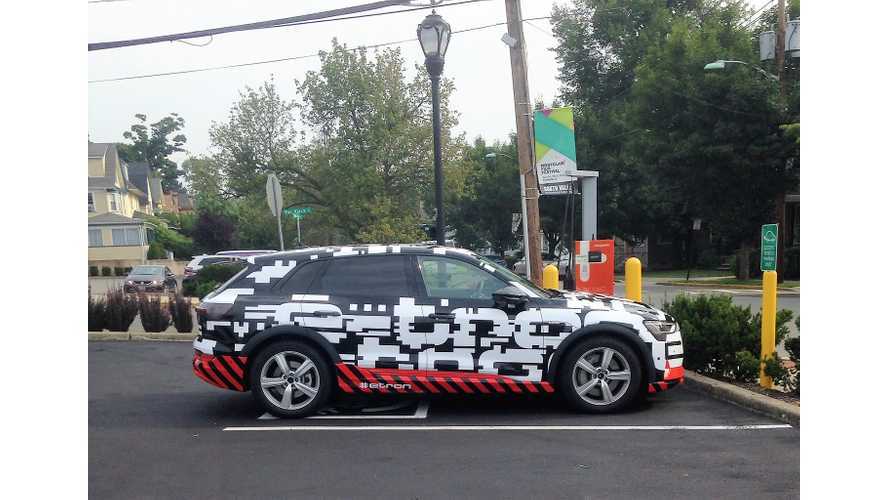 Montclair, New Jersey? Who would have thought it would be a hotspot to see pre-launch EVs testing public charging stations?

InsideEVs has seemed to identify one of the most-frequented charging station locations to catch prototype EVs charging during their validation period before launch.

Rendering Shows What Production Audi E-Tron May Look Like

This is the same location where we spotted a Porsche Taycan about 6 weeks ago. Earlier in the year, we caught a Range Rover HSE P400e PHEV there, and then a whole pack of Jaguar I-Paces back in April. It's unclear if this is the same e-Tron Quattro spotted by InsideEVs reader, Doug B. a couple weeks ago in Colorado. If it is, it's certainly getting around the country quickly.

Audi has announced that they will unveil the production version of the e-Tron Quattro on September 17th in San Francisco California, and begin taking reservations for the vehicle that same day. Audi is requiring a $1,000 deposit to reserve an e-Tron Quattro (Hmm, sounds familiar), and deliveries are projected to begin in early 2019.

Last summer at the Audi Summit in Barcelona, an Audi spokesman told InsideEVs that the PHEV version of the new A8 would be available in the US sometime in early 2019. It will come with a 14.1 kWh battery and is expected to deliver about 31 miles of electric range.