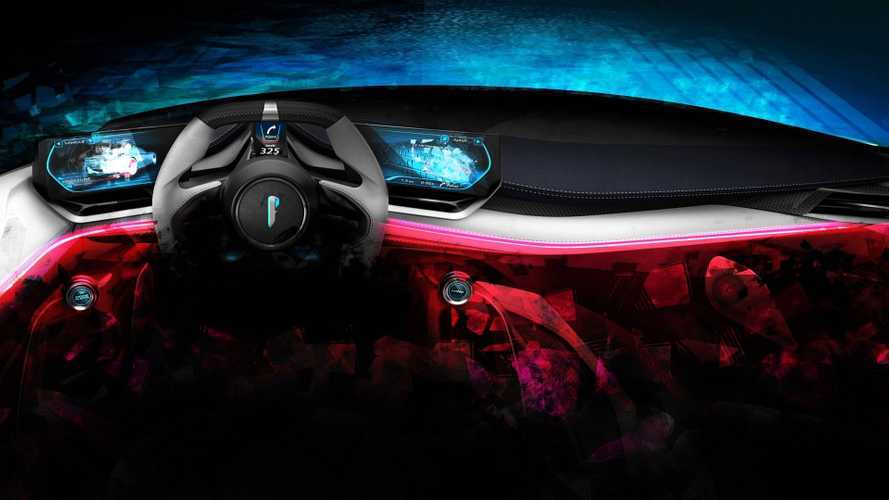 Sketches show a high-tech cockpit focused on the driver.

2020 will be the year when the Automobili Pininfarina PF0 is going to hit the streets, but prospective owners will be given the opportunity to check out the electric hypercar next week in Pebble Beach. Billed as being the “most powerful Italian sports car ever” made, the high-performance electric beast will adopt a minimalist design for the cabin as previewed by the new teasers published today.

We’re only seeing two physical buttons on the dashboard, one to the left of the driver to go through the driving modes and the other to the right serving as the gear selector. The angular steering wheel clad in leather and carbon fiber appears to incorporate a few buttons, but we’re getting the feeling these are of the touch-sensitive type.

Directly in the driver’s view is a small digital screen showing essential info, while to the left and right of the instrument cluster are two large displays providing a multitude of details. The LED ambient lighting of the dashboard continues uninterrupted on the door panels, while the body-hugging seats appear to offer great lateral support. Carbon fiber accents are combined with blue and white leather to create a mélange between a luxury car and a sporty machine.

While the new teasers are all about the interior, we can’t help but notice the large display on the left could very well show the PF0’s rear end and its side profile, unless it’s a generic image of a car just to throw us off.

Design aside, Automobili Pininfarina reiterates the hypercar will accelerate to 62 mph (100 kph) in under two seconds and will have a top speed in excess of 250 mph (400 kph). With the battery pack fully charged, the PF0 will cover more than 300 miles (500 kilometers) on a single charge.

Mum’s the word about the technical specifications at this point, but we’re expecting four electric motors to churn a combined output of 2,000 horsepower (1,491 kilowatts).

We won’t be seeing much of the PF0 on the streets as Automobili Pininfarina – part of the Mahindra Group – will keep the electric hypercar exclusive by making only 150 examples.