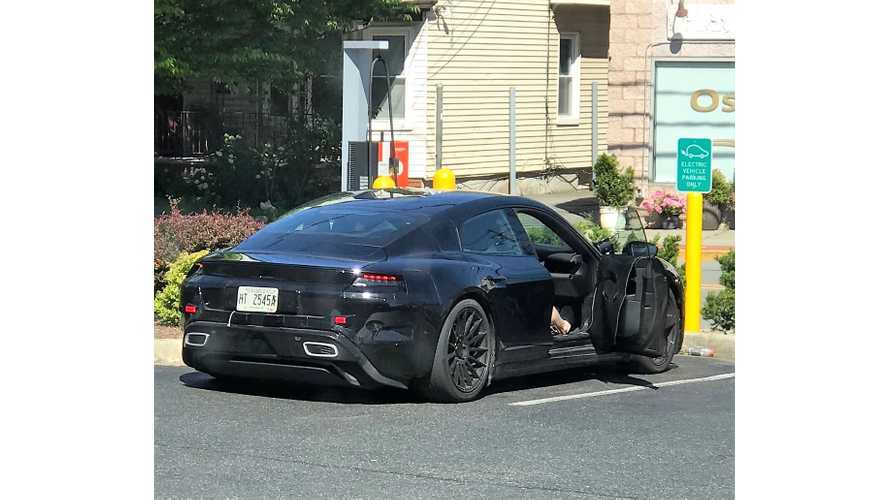 There haven't been too many spy shots of the Porsche Mission E, but we got lucky today and caught two Mission Es (production name is Taycan) testing public charging stations in Montclair, New Jersey.

The Porsche folks driving the cars weren't too pleased, as they quickly unplugged and high-tailed it out of the parking lot as soon as they realized we were taking pictures of them. This is a stark contrast to how the Jaguar executives acted back in April when we caught four I-Paces in the same parking lot testing the DC Fast charger on site. They were happy to park the cars where I wanted in an effort to allow me to take some nice pictures.

Porsche recently confirmed the Mission E will be called the Taycan when it hits the showroom, which is rumored to be sometime in late 2019 or early 2020. The Taycon will have a base price of about $75,000.

There will be three trim levels, each with different power output rated at 402, 536, and 670 horsepower, respectively. All models will have all-wheel-drive at the launch, but Porsche hasn't ruled out offering a rear wheel drive variant in the future. Real world range is claimed to be 300 miles.

The most unique aspect of the Taycon will be its 800-volt battery system. With this system, Porsche claims the Taycon will be able to recharge to 80% (about 250 miles) in about 20 minutes. The obvious problem with that is, while it sounds great, there's simply no infrastructure that can deliver 800-volts. Unless Porsche takes a page from Tesla and starts investing hundreds of millions of dollars into an 800-volt network of charging stations, we're afraid they will be few and far between.

It’s a sports car. There’s no doubt about that. But it’s not the sports car you might expect. Its powertrain is completely new, but, like that of every Porsche, is based on technology tested in motorsports. Two permanent magnet synchronous motors (PSMs), similar to those in the 919 Hybrid that won Le Mans, propel the car and recover energy when braking. One of them powers the rear axle, the other the front axle. With a combined output of more than 600 hp (440 kW), they catapult the Mission E to 60 miles per hour in less than 3.5 seconds, and to 124 miles per hour in less than 12 seconds. The PSMs are the turbos among electric motors. They convert electrical energy into propulsion very efficiently and smoothly, and build up relatively little heat in the process. This means that they cool down quickly. Whether a Porsche has a combustion engine or a purely electric powertrain, it needs to be able to perform on a race track.