We finally get to learn all about the new Nissan LEAF NISMO.

In July, Nissan confirmed that the first-ever, long-awaited LEAF NISMO would go on sale in Japan on July 31st. We are confident that it will make an appearance on our shores at some point in the near future, but perhaps that won't happen until the 60-kWh 2019 LEAF arrives. Nonetheless, we can continue to hold out hope. 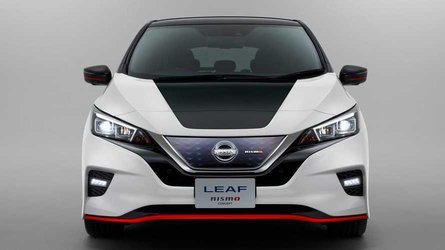 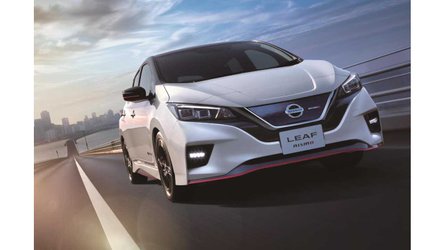 Nissan Confirms LEAF NISMO: On Sale End Of This Month

According to Nissan, the LEAF NISMO features more responsive acceleration due to a custom-tuned computer. It also boasts an upgraded suspension for improved ride and handling, as well as custom tires. However, the more obvious enhancements are related to the NISMO's sporty exterior and cabin. Below, we've included Nissan's LEAF NISMO custom features list:

At this point, we've shared images and videos of the stylish LEAF variant on a number of occasions, as well as a video of the NISMO out on the test track. You can read the official press blast and view more images below:

YOKOHAMA, Japan (July 19, 2018) – The Nissan LEAF NISMO will go on sale July 31 in Japan – combining, for the first time, the excitement and advanced technologies of the world’s best-selling electric car with the sporty image and performance of the NISMO road car series.

The model is based on the new Nissan LEAF, which debuted in October 2017. The new LEAF offers the exhilarating acceleration and environmental performance of a 100% electric powertrain, a dynamic design, and advanced technologies such as e-Pedal and the ProPILOT and ProPILOT Park autonomous driving features.

The new Nissan LEAF is the icon of Nissan Intelligent Mobility, the company’s vision for changing how cars are powered, driven and integrated into society. It has won several awards for its cutting-edge technology and zero-emission performance. The LEAF won the “2018 World Green Car” award at the New York International Auto Show and has received 5-star safety ratings from both the Japan New Car Assessment Program and the European New Car Assessment Program.

The following is an overview of the Nissan LEAF NISMO:

The sporty interior appeals to the senses with prominent use of NISMO’s custom red accents, including the three-spoke steering wheel with a red center mark. The instrument panel features a custom carbon-like finish, and the electronic shift has a gun metal chrome finish.

The custom tuning computer in the Nissan LEAF NISMO allows for a delicate but strong acceleration response. This results in comfortable driving on both city streets and winding roads.

NISMO, a short form of "NISsan MOtorsports," is the performance brand for Nissan and one of the company's purveyors of "innovation that excites." NISMO offers products featuring innovative technology and high performance to a wide range of customers for street use. NISMO cars provide an exciting driving experience with motorsports-inspired aerodynamics and styling, enhanced handling characteristics and unmatched agility.

Nissan is a global full-line vehicle manufacturer that sells more than 60 models under the Nissan, INFINITI and Datsun brands. In fiscal year 2017, the company sold 5.77 million vehicles globally, generating revenue of 11.9 trillion yen. On April 1, 2017, the company embarked on Nissan M.O.V.E. to 2022, a six-year plan targeting a 30% increase in annualized revenues to 16.5 trillion yen by the end of fiscal 2022, along with cumulative free cash flow of 2.5 trillion yen. As part of Nissan M.O.V.E. to 2022, the company plans to extend its leadership in electric vehicles, symbolized by the world's best-selling all-electric vehicle in history, the Nissan LEAF. Nissan’s global headquarters in Yokohama, Japan, manages operations in six regions: Asia & Oceania; Africa, the Middle East & India; China; Europe; Latin America; and North America. Nissan has partnered with French manufacturer Renault since 1999 and acquired a 34% stake in Mitsubishi Motors in 2016. Renault-Nissan-Mitsubishi is today the world’s largest automotive partnership, with combined sales of more than 10.6 million vehicles in calendar year 2017.

I take a drive in the new Nismo Leaf!