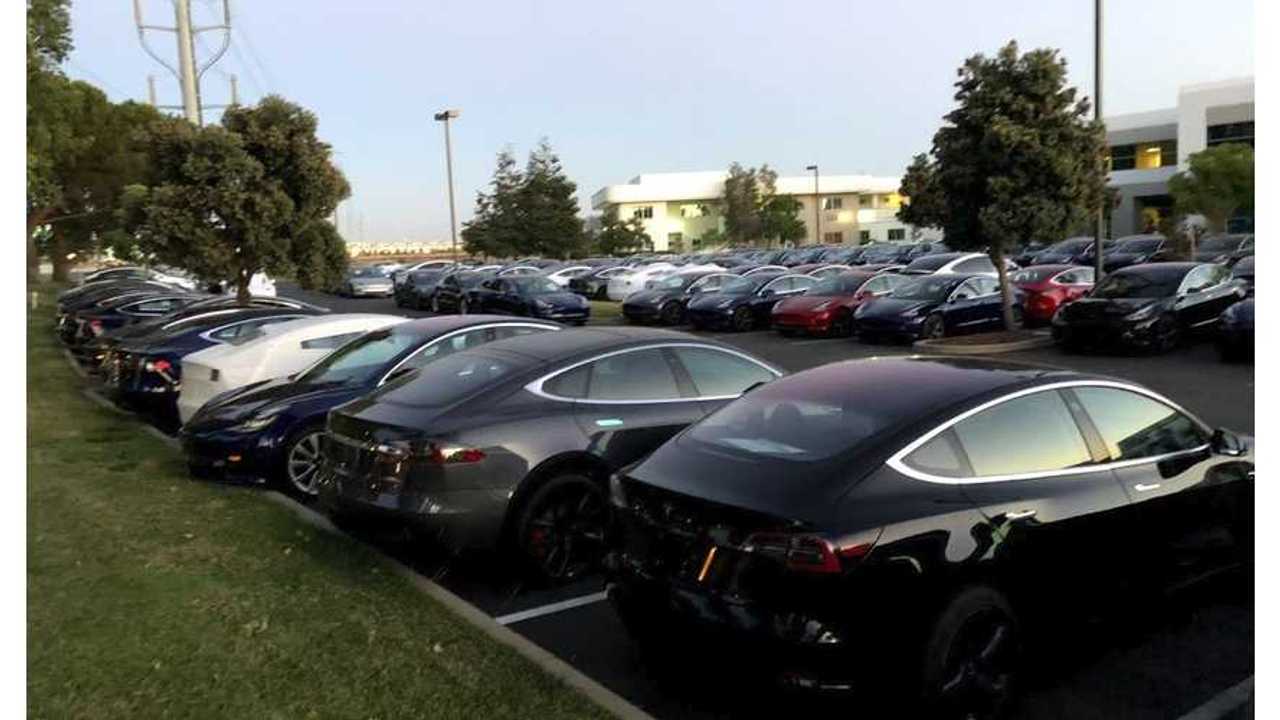 One of our eagle-eyed contributors came across this parking lot at a vacant building near Tesla's Fremont factory and guess what we see? A sea of Tesla Model 3s, all waiting for delivery.

***UPDATE - We now have video to share with you of this lot from June 28 - Video directly below:

Back in February, Tesla confirmed having produced its 300,000th electric car. Tesla's domestic numbers are closing in on 200,000, effectively nearing them to the end of the tax credit number. Today, we have a chance to take a look at a breathtaking sight of over a 1,000 Teslas in one single place, all suspected to be waiting for delivery. The image was captured by George Betak, a long-time InsideEVs contributor. While the parking lot at this office park has an official capacity of 1,000 vehicles, George suspects that there were significantly more Teslas than that.

I thought that I would share what I accidentally discovered on the way home last night. There is a vacant office building about 3 miles from the Tesla factory at 48401 Fremont Blvd that was full of Teslas. It was breathtaking.

As you can see from the media gallery below, most of these vehicles are the Model 3. We're guessing that this probably isn't the only location like this. The ramp-up production means that there are probably more lots like these, giving any Tesla Motors aficionado a huge smile across their face. With Tesla ramping up both production & deliveries, there's a good chance that the 200,000th U.S Tesla delivery is hiding in one of these parking spaces. For some of our readers, this means that their own Model 3 or Model S might be one of the cars seen below.

A few months back Tesla Motors confirmed that the company produced its 300,000th vehicle. Additionally, after the last quarter results were in, it was clear that Tesla broke its quarterly delivery record with 34,494 vehicles during the fourth quarter. The deliveries comprised of 11,730 Model S vehicles, 10,070 were Model X, and 8,180 were Model 3. The company stated that the net orders for Model S and X were at an all-time Q1 record, and demand remains very strong. Model S and X customer vehicles in transit were high. 4,060 Model S and X vehicles were in transit to customers at the end of Q1 - a whopping 68% higher than at the end of Q4 2017.

An additional 2,040 Model 3 vehicles were also in transit to customers. According to Tesla, all of these vehicles will be delivered to customers in early Q2 2018, which keeps the company on track for their full-year 2018 Model S and X delivery guidance. In turn, Tesla is nearing the limit of $7,500 federal tax credits, which will boost effective prices of their vehicles. Is the tax credit slayer vehicle among one of these, it remains to be seen.