Check Out A Flyover Of The Tesla 'Tent' And Fremont Factory

Watch from above as a Model 3 rolls off the temporary general assembly line.

We have already taken a look at some early shots of the new temporary assembly line in Fremont. Referred to by Tesla CEO Elon Musk as a 'tent', the line was likely constructed to push production at the end of Q2 towards Tesla's self-imposed 5,000 / week goal. 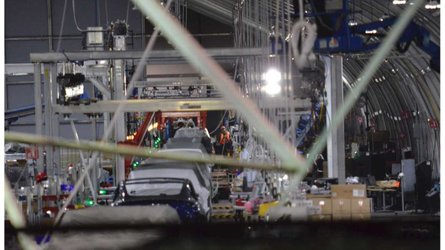 But the 'tent' line should also help boost vehicle deliveries in Q3. Once Tesla hits the 200,000 unit trigger, they will have extra incentive to sell as many cars as they can. This would help maximize the number of buyers that receive the full $7500 tax credit.

Production at Fremont has continued to rise and has seemingly surpassed 5,000 units/week according to recent posts by Musk and other employees on social media. This news goes hand in hand with recent battery production claims from an employee at the Gigafactory in Sparks, Nevada.

At this point, we don't know if this level of production will be sustained throughout the 3rd quarter. However, following the end of the 1st quarter, Tesla was able to maintain (and soon increase) the production levels they reached in late March. Although scheduled production shutdowns offset some of those gains.

So, how much of this production success is due to the new line that Elon Musk said was 'way better than the other GA line’? Probably not much yet. The line reportedly started off quite slowly, producing very few cars in its first few days. But, more Model 3s appear to be rolling out of the 'tent' recently. The temporary line could end up playing a major role in Q3 production.

You can also watch a Model 3 roll out in the Tweet below:

The future of #Tesla hinges on this gigantic tent. Overflow production line added in back lot of @tesla HQ. @elonmusk wants to pump out 5K #TeslaModel3 per week. @Teslarati pic.twitter.com/KhPtPHerzB