Well, this is a drag.

The Tesla Model 3 isn't our first electric choice to take to the drag strip. In rear-wheel-drive form, the only version yet available (AWD Performance will arrive soon), it's not especially quick.

Ok, maybe it's got faster ponies than a Ford Mustang with a 310-HP, 2.3-liter turbocharged 4-cylinder Ecoboost engine, but with the fastest time we've seen for the baby Tesla in the quarter mile being 13.330 seconds at 104 .07 miles per hour, it's fair to say there are any number of cars more capable. And some of those cars are even SUVs. 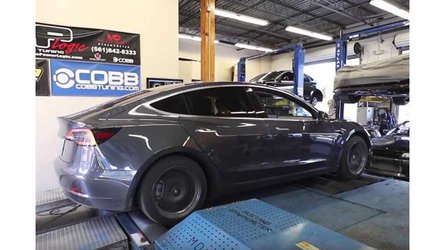 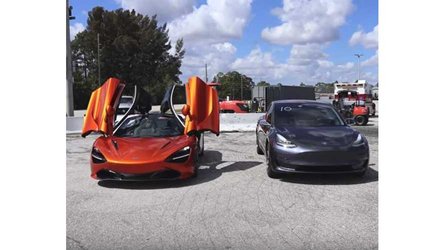 Take the one in the short video above, for instance. Lined up against the all-electric from California, the Chelsea tractor — that's a Briticism for a fancy sports utility vehicle — from Range Rover might not look like an imposing threat, but looks can be deceiving. Apparently, this boxy beast is as at home staring down 1,320 feet of asphalt as it is trundling along the upscale streets of London's Knightsbridge district. It's probably also quite comfortable making its way through fields of heather too, but that's for a different story.

When the light goes green, the Rover launches dramatically with an unsubdued roar, making us think all four wheels are engaged. With no Ludicrous mode to lean on, our battery-powered friend leaves the line a bit more softly. Now, maybe it's the camera angle, or possibly our pro-EV bias talking here, but it does seem like the Model 3 starts to catch up as they make their way down the strip.

In the end, though, the tale of the tape is quite clear. The beastly SUV takes the win with an impressive 12.870 time at 109.66 mph while Silicon Valley sedan settles for a mediocre 13.607 seconds at 102.21 mph. Like the famous Cornelius McGillicuddy (the baseball player better known as Connie Mack) once said: "You can't win them all." Indeed.