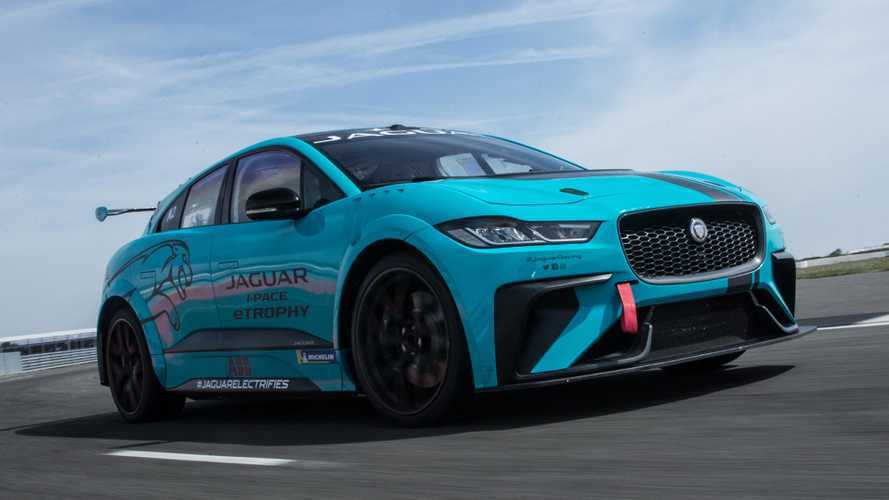 We drive the latest electric car to bring high voltage to motorsport.

Here is the reality of watching a motor race. You stand at a wind-swept track, far from civilization. On the rare occasion it doesn’t rain, you will get sunburnt. Nobody knows who is in what position as the big screens are too far away to read and the PA system is nothing more than white noise. The food’s only fit for the trash bin. And on the drive home you’ll notice your ears are ringing and you have a headache.

Electric car racing hopes to change all that. The new Jaguar I-Pace eTrophy championship is joining the FIA Formula E series, starting this December. The cars will race around the streets of some of the most glamorous cities in the world – from New York to Paris. There will be no ear-splitting noise and no eye-watering fumes. And after the race you’ll be able to visit the latest hip restaurant or shop ‘til you drop.

In a world that is steering a course toward the electric car, this, says Jaguar, is the future of motor racing.

Last year, three million battery-powered vehicles were on the road. By 2030, the International Energy Agency predicts there will be 125 million.

So Jaguar is investing a small fortune in racing alongside Formula E, as it aims to maintain any momentum gained from bringing its new all-electric I-Pace production car to showrooms long before electric cars from Audi, BMW, or Mercedes.

Is this the sort of racing car drivers want to race, though? And will fans pay good money to watch them go wheel-to-wheel?

Transforming a road-going Jaguar I-Pace to a racing car is the job of engineers at Jaguar Racing. And it’s fair to say the challenge was making the electric SUV lighter.

Colin Ramsden, the engineer leading development of the I-Pace eTrophy car, puts it like this: “It’s not a light race car, but the driver feedback is very good and importantly it doesn’t feel its weight.” He and his team have managed to drop the weight from 4,702 pounds to 4,398 pounds.

Everything from inside the car – the seats, trim, sound proofing materials, fancy double-decker touchscreen system and digital instrument display – has been thrown out. The aluminum bodyshell is dressed in light, composite and carbon fibre panels. Then a roll cage, race seat, and racing pedals are added, there’s a Cosworth digital display, a panel of switchgear – including buttons for the car’s transmission – and it’s finished off with a racing steering wheel that lets the driver fiddle with settings for the AP Racing anti-lock brakes, the powertrain’s torque maps, and the energy recuperation.

The powertrain of the battery pack and two electric motors is the same as the road car’s. That means this two-ton race car has 395 horsepower and 513 pound-feet of torque. However, with a smile on his face Ramsden says, “we have tweaked the software.”

This is a relatively simple race car. Drivers can adjust the front and rear anti-roll bars, the compression and rebound of the dampers, and play with the camber and rear wing, but that’s about it.

The cars will be run on road tires, which is curious. Admittedly, they’re the Michelin Pilot Sport 4, but in the early stages of a race, tire conservation may be critical, as by the end of 30 minutes they are likely to be past their best – although Jaguar says they last the distance.

Will there be some sort of ‘push to pass’ boost feature? Jaguar Racing hasn’t yet decided.

As for the championship’s eco credentials, there is still room for improvement. The cars’ batteries are ultimately charged by generators burning biodiesel. Until all those involved in putting on the show can switch to renewable energy, such as solar power and energy storage solutions, there’s some fine-tuning required further down the road.

The way the I-Pace eTrophy race cars drive has been set-up by the company’s SVO division – Special Vehicle Operations – also responsible for Jaguar’s high-performance road cars, like the F-Type SVR.

As mentioned, as racing cars go, this one’s unlikely to win your office-wide weight loss competition. However, it is helped by the fact that the weight – the battery pack – is under the floor of the car, keeping the center of gravity low.

And sure enough, around the Stowe circuit complex, on the infield of Silverstone’s Grand Prix track, the I-Pace eTrophy feels surprisingly agile. It responds quickly to steering inputs, the Michelins hold the road determinedly, and quick direction changes through a sequence of successive corners don’t trip it up.

The acceleration is brisk rather than brutal. It can go from 0-62 miles per hour in 4.5 seconds, and with no noise and a flat torque curve, the rate at which the I-Pace eTrophy racer builds speed is deceptive.

With some heat in the tires and brakes, it’s time to start exploring the car’s limits – and they are mostly determined by the brakes. It’s a good thing drivers will be wearing HANS neck restraints, because the AP Racing anti-lock brakes are phenomenally powerful, even for a racing car. Getting one over on rivals is undoubtedly going to come down to being the last of the late brakers.

It’s also odd to hear in such detail those brakes going about their work. With no supercharged V8 under the hood, drivers are going to have to tune themselves into other reference points to get a feel for how hard they’re working the electric race car.

Because the two electric motors give the I-Pace eTrophy four-wheel drive, there’s no wheelspin, and when you give the tires too much to do, the nose will gently push wide, with plenty of warning.

Trail-brake into a corner and the I-Pace eTrophy shuffles its weight around a little, to help the nose bite into an apex. But that’s about it. It isn’t likely to challenge the abilities of the sort of drivers that are inquiring about the championship – Katherine Legge has confirmed; interested parties are said to be from GTs, Indycar, and Formula 2.

Should I race one?

This may not be the fastest nor the most challenging race car to drive, but the spectacle of 20 identical cars charging nose-to-tail, and leaning on one another’s door handles as they make their way around city center tracks could be an amusing downtown diversion on a sunny Sunday.

For drivers, the cost is prohibitive. However, the opportunity to join a new dawn of electric car racing is not to be underestimated. Car manufacturers and sponsors are eager to align themselves with high voltage racing. And I-Pace eTrophy offers a stepping stone to Formula E, which could ultimately result in a drive for a factory team.

And as any good racing driver knows, go-for-broke racing isn’t always the best approach. Sometimes tactics have to come into play.