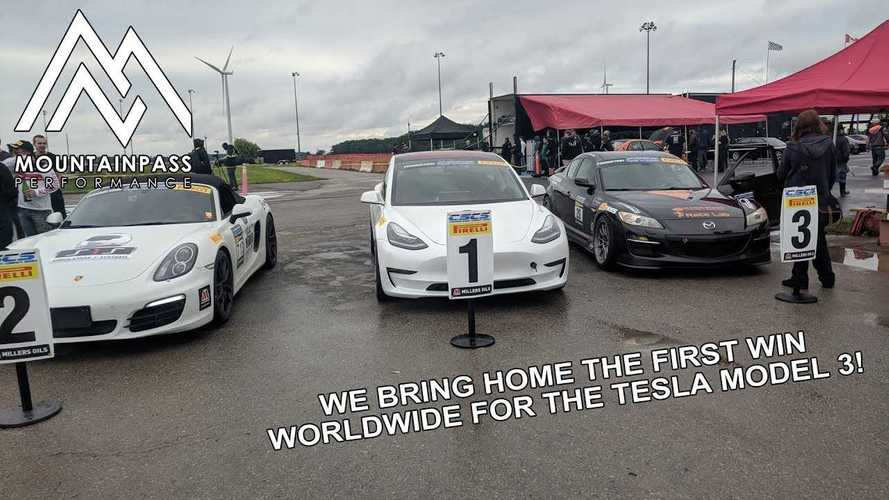 Is the Tesla Model 3 a track machine? We thought it was a family sedan.

Tesla Model 3 is one of the most appealing vehicles on the market today. This fully electric mid-size sedan comes with impressive performance and non-anxiety-inducing range, in turn, making it a very appealing EV purchase. Hence, it’s hard to overlook the Model 3 when choosing your all-new family hauler. On the other hand, there’s not a lot of people who would mistake the Model 3 for a high-performance track machine.

But that is about to change.

Just recently, a Tesla Model 3 ran in an event that's part of the Canadian Sport Compact Series - a time attack racing affair - beating the likes of the Porsche Boxter and a Mazda RX-8. What's more impressive is that the feat was done on a slippery racetrack. To make things even more interesting, the Model 3 that raced these ICE performance machines is the non-performance, long-range, RWD variant of the compact electric sedan. How ‘bout them apples?

Naturally, the Model 3 is tuned & tweaked to allow it to run with the big boys on the track. With professional race car driver, Sasha Anis, behind the wheel of this Model 3, the EV player in an ICE dominated grid was ready to give the old establishment a run for their money. Both the driver and the vehicle are part of the OnPoint Dyno/Mountain Pass Performance, a team that made sure this Model 3 received all the track love it could get. You can grab a detailed look at the full build showcase posted over at the Tesla Motors Club, revealing all the interesting track oriented upgrades this Model 3 received.

The most difficult part of this build was to ensure the vehicle is race ready. After all, neither the OEM brakes nor the wheels, tires, suspension, and battery, were ever designed for the racetrack. Plainly put, the Model 3 is a vehicle that was never meant to be utilized in hot & heavy situations that come from time attack racing dynamics and all the problems arising from such usage. But, judging by the results of this recent race, it seems the team at OnPoint Dyno/Mountain Pass Performance solved these issues with flying colors and all the upgrades installed helped turn the Model 3 into a track machine.

After the lightweight wheels & tires were installed, it was time to upgrade the Model 3’s brake system. This particular Model 3 now utilizes their prototype brake-upgrade kit, prototype pads, and racing brake fluid. This ensures less brake fade and improved braking performance. Additionally, the team also installed a complete Coilover suspension system and suspension arms. All these parts ensure the Model 3 is as competitive as the next car on the grid.

The recently uploaded YouTube video from auto enthusiast Edmund Manasan gives us a detailed look at how the Model 3 performed against stiff competition in rather difficult conditions for a rather heavy, RWD Tesla Model 3; the track is wet, rather narrow & curvy, while the competition consists of some of the best handling driver’s cars available on the market today. Ultimately, Sasha and his Model 3 finished first after beating a Porsche Boxter and a Mazda RX-8.

In reality, it’s no real surprise that Sasha Anis and his Tesla Model 3 became a dark horse in the Canadian Sport Compact Series. At one point in time, the car ranked Number 5 out of 120 vehicles entered in the series, proving the worth of electric vehicles in such events.

We can only imagine what the Model 3 Performance, which does 0-60mph (0-97km/h) in just 3.5 seconds, achieves a top speed of 155 mph, and a range of 310 miles per charge, will be able to do as a performance machine. The future is electrifying, to say the least.