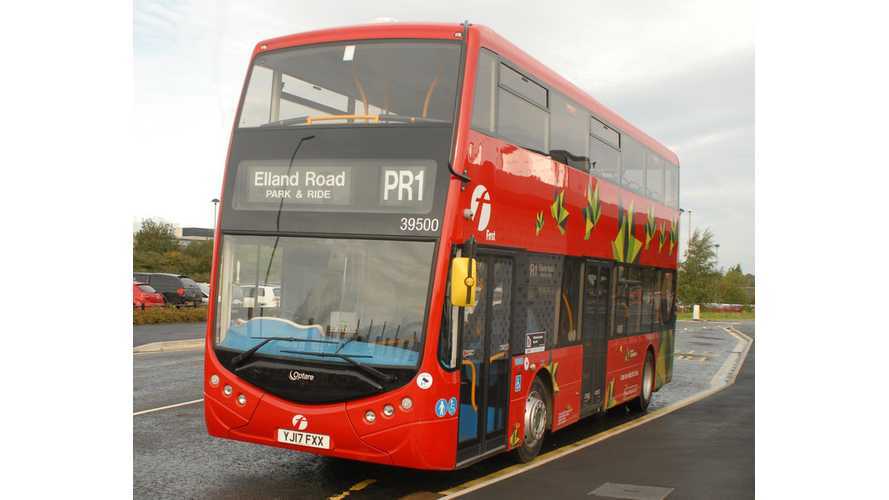 The British capital soon will have the world's largest fleet of double-decker electric buses as 68 were ordered (on top of several already in operation) from BYD/British Alexander Dennis Limited (ADL) and Optare.

The Optare Metrodecker EV is equipped with a 200-kWh battery pack and can go up to 150 miles (240 km) on a single charge. The bus can take carry some 90 passengers, despite it being just 10.5 m long.

The innovative Metrodecker EV has been developed from the wheels up by Optare with support from its customers, vendors and partners. The unique integral space frame design of the Metrodecker EV means it weighs in at only a few hundred Kilos more than the diesel equivalent and has a plated GVW of 18000kg.  The Metrodecker EV bus for London will carry over 90 passengers with a range of over 150 miles on a single charge."

“We’re committed to reducing emissions from London’s buses and making routes 43 and 134 exclusively electric is an important step to a zero-emission fleet. Buses are crucial to reduce Londoners’ reliance on cars, and with this landmark order it means the largest pure electric double-deck bus fleet in Europe will help reduce emissions across the capital. Electric buses are good for air quality and improve the customer experience, with less noise and fewer vibrations, all creating a more comfortable journey.”

“Metroline is a dynamic and ambitious operator with 99 routes across London and we are pleased to lead in the implementation of London’s first all-electric double deck routes having been involved closely with this project from the outset.”

“Optare has the largest parc of electric buses s in the UK with a decade of experience of working with operators across the country. Optare are delighted at the news of this order, which follows extensive in-service trials of the Metrodecker EV with a number of operators in London and other cities around the country over the last 12 months. The next generation Metrodecker EV destined for London is currently in testing before entering service trials later this year.”

“This order for our double deck product launched in November 2016 at Euro Bus Expo begins the next chapter in the Optare electric bus journey. The first Transport for London route to operate with solely electric buses began operation with an all Optare single deck electric bus fleet four years ago. Optare are delighted to be supplying their buses once again for the first all-electric double deck bus routes in London. However, the journey doesn’t stop here. We continue to develop and refine this technology. We look forward to bringing the next generation of electric buses to market later this year.”