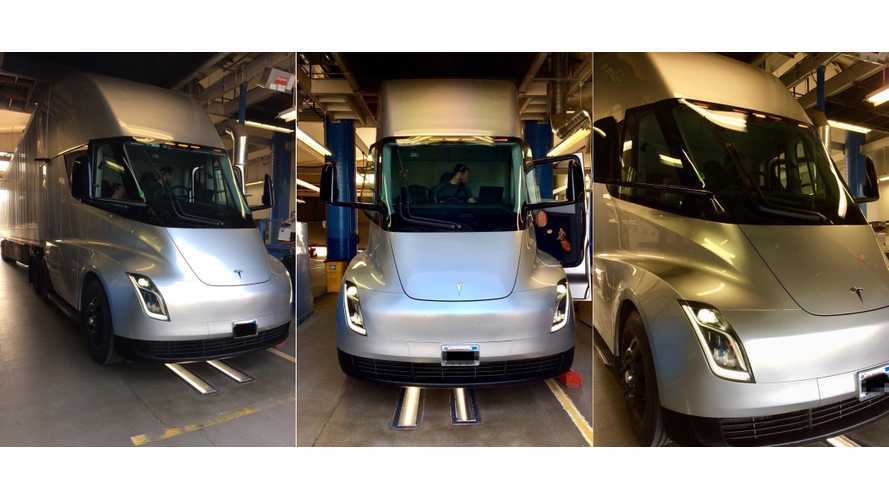 Tesla Semi was spotted at truck inspection center off Interstate 80

It was a good day for the ladies and gentlemen of the California Highway Patrol commercial truck inspection station off interstate 80 earlier last week. Last Friday saw them having the pleasure of stopping and inspecting a brand new Tesla Semi at the Donner Pass Inspection Center. According to the CHP, the electric truck prototype was given an all clear. The truck was stopped while presumably heading from the Tesla Gigafactory 1, located roughly 50 miles from the inspection center, while heading towards the Tesla Freemont facility.

More about the Tesla Semi

Several images of the Tesla Semi at the Northern California weigh-in station and inspection center were shared by the CHP - Donner Pass on social media. Judging by the status update, the Tesla Semi provided quite an exciting experience for the crew manning the inspection station.

“The future has arrived…….The new Tesla truck tractor was inspected today at the facility,” noted the Commercial Vehicle Enforcement Facility on its Facebook page.

Even though the CHP has full authority to stop any truck (including Tesla) for a routine inspection, we presume that the officials were definitely more excited about this stop than any other. While taking their jobs seriously and protecting the nation's roads, the ladies and gentlemen of the inspection station got a glimpse of the future. Who knows, maybe in 5-10 years, they won't even have a chance to interact with the drivers, as presumably fully autonomous trucks will be running these roads by then.

When asked by a Facebook user about the whole experience, the CHP - Donner Pass representative answered in an interesting way: “Very easy to inspect and very clean. We like it. Very clean.”

For businesses looking to reduce their carbon emissions footprint while also cutting transportation and logistics costs, the Tesla Semi is a great solution. Companies like FedEx, PepsiCo, UPS and Bee'ah have all publicly expressed interest in the battery-powered quad-motor semi-truck. According to the Elon Musk, the Tesla CEO, speaking in the company's Q1 2018 earnings call, there are roughly 2,000 reservations already made for the electric long-hauler. And we expect this to go up in 2019. The electric revolution is hitting the utility vehicle market, and there's no stopping it.