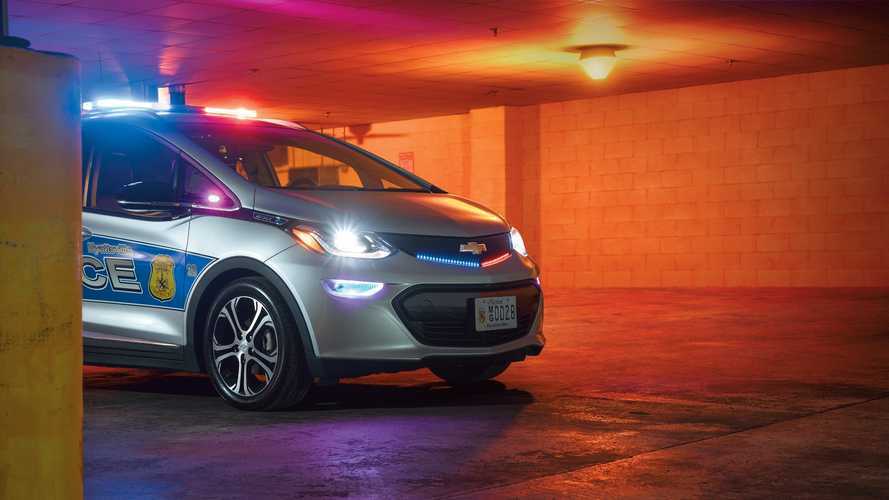 Long range of the law.

The Bolt EV seemed to hit the middle ground of performance, range and price that the department was looking for. “When I first heard about the Bolt EV, I thought, ‘Wow,’” said Harnett. Sergeant Harnett says that his department is one of the first in the United States to use an all electric vehicle in regular patrol duty.

In order to get it on the streets, a lot of additions were needed. The car includes typical police equipment such as two-ray radio, computer, sirens, and custom lighting. Since officers often leave their vehicles idle for long periods of time, a device was also installed that automatically disconnects all aftermarket equipment 60 minutes after the vehicle is idle. Hartnett says:

The Bolt EV isn’t as wide as a standard patrol car, so we had to get creative (...)

The installation company did a great job. The vehicle turned out looking fantastic. Even the decals look great.

EVs will play a large role in the future of police departments.

Sergeant Hartnett says there are two common misconceptions about electric vehicles being used for police work: lack of vehicle range and ability to pursue a suspect at high speeds. Now that long range, affordable EVs are on the market, he feels these concerns are unfounded. The nearly 60 kWh battery of the Bolt EV will last for an entire shift. The vehicle is also more than powerful enough to keep up in a pursuit.

The people I talk to think the police department is taking a real step forward by having a car that is environmentally friendly (...)

I’ve also been getting calls from a lot of other police departments about how the Bolt EV is performing and whether or not it makes sense for them.

It’s clear to me that EVs like the Bolt EV certainly have a place in law enforcement.

The Bolt has been on the job less than a year and has exceeded expectations. The Hyattsville police department is already looking to add a second Bolt. For a video containing additional photos of the interior, check our out previous article. For more details and photos, click the link below.