Is Tesla Stockpiling The Model 3 To Delay The Tax Credit Expiration? 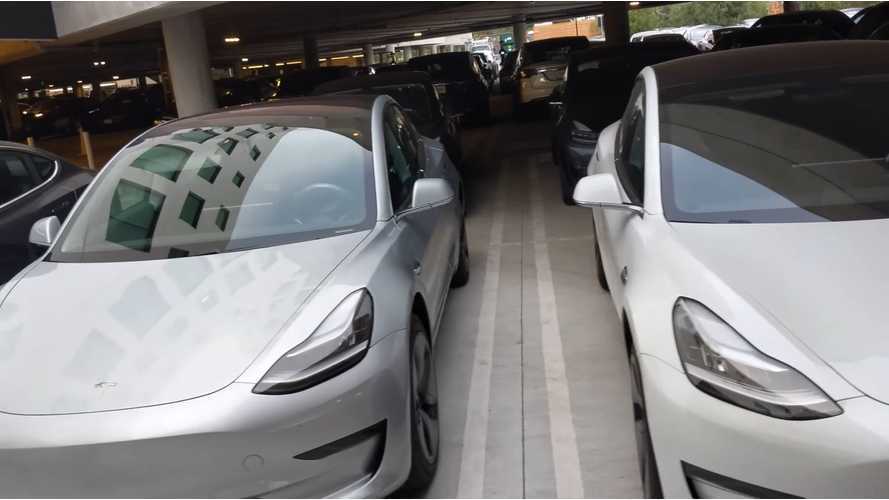 Some feel a collection of Model 3's in California is proof of an intentional delay of the automakers 200,000th U.S. sale.

I don't think I'm alone in obsessing over how many cars Tesla will sell this month.

For hopeful owners of the Model 3, a decision by Tesla to not delay sales could cost buyers thousands in federal tax credits.

If you're not well-versed in the details of the U.S. electric vehicle tax credit, you can check out this article for more info.

Will the 200,000th Tesla be delivered in June or July? People are divided on what they expect to happen. But I think it is almost universal that everyone wants Tesla to delay until the 3rd quarter. If they do so, the full $7500 tax credit will be available until the end of December. If the 200,000 limit is hit in June, the full credit will only be available through September.

Any evidence that might point to a delay of the 200,000th sale is welcome news. So naturally, a large parking lot full of Model 3's has caught peoples attention.

The lot is located in Richmond, CA and appears to be at Canal Blvd and Seacliff Dr near a shipping hub. Based on satellite images, it can hold about 650 cars. That would be less than 2 days of Model 3 production.

Presumably, these Model 3's are waiting to be transported east. This is hardly unusual, as Google Maps satellite images show this lot is primarily used for this purpose.

Is this verifiable proof that Tesla is delaying? Not at all. But it is additional evidence to consider. Especially when combined with slow production increases, a short shutdown in late May, and the start of Canadian deliveries.

Most vehicles produced this month will be going to U.S. buyers. A decent portion of mid-to-late May production went to Canada. Canadian Model 3 deliveries have dropped sharply since the first 1.5 weeks of June.

At the same time, this could just as easily be the result of increased production. Or a bi-product of the shipping delays that have been reported by buyers in both the U.S. and Canada. Or any number of other explanations.

Well, in a little over a week we should know for sure what the timeline is for the tax credit. Hopefully, we will be taking advantage of a larger rebate until December.