Fastned began expansion of its fast-charging network beyond the Netherlands by installing the first station in Germany along the A3 highway at Limburg an der Lahn (exit Limburg-Süd).

The station consists of a few chargers, including the 175 kW ones (CCS Combo as the CHAdeMO are limited to 50 kW by the connectors/cables it seems), but the company says that the stations is ready for 350 kW in the future.

By the end of this year, Fastned intends to install 18 stations in Germany. In the Netherlands, there are 73 already installed. 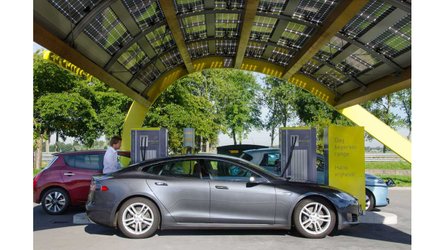 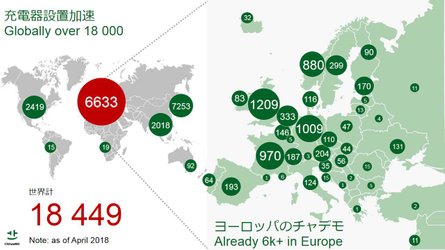 The other markets where the company will build a charging infrastructure are the UK and Belgium. In the longer perspective, Fastned plans to install some 1,000 stations in Europe.

"Fastned has the ambition to build a European network of 1000 fast charging stations, of which several hundred in Germany. The iconic stations are located at busy locations along motorways and in cities. With this network, Fastned wants to give electric drivers the freedom to drive throughout Europe. Fastned currently has 73 stations operational in the Netherlands and is preparing to roll out its network to other countries, including the United Kingdom and Belgium. Fastned plans to open 18 stations in Germany before the end of the year.

With the roll-out of a network of fast-charging stations, Fastned is responding to the exponentially growing number of electric cars in Europe. As a result of the decreasing price of batteries, more affordable electric cars with a larger battery and more range are being introduced. This makes it possible to cover longer distances, but also drives the need for fast charging infrastructure that can quickly charge these cars. With these stations charging will become more and more like refueling your car, but with energy from sun and wind."

"At Fastned, all types of fully electric cars can charge their battery super-fast. The roof of the station consists of solar panels. All power that Fastned supplies comes from the sun and the wind. Charging can be initiated with the Fastned app or by swiping a charging card. Payments are settled via a charging card, bank debit or creditcard."

"After the successful German Energiewende now comes the German Autowende. In the next few years, German car manufacturers such as Porsche, Audi, Volkswagen, BMW and Mercedes will introduce fully electric models that can charge at high power. This is a great challenge and opportunity for the automotive industry and charging companies like Fastned. Together with municipalities, landowners and suppliers, we are building the charging infrastructure that is needed to fast charge these cars with energy from the sun and wind.”

“Fastned’s first fast charging station outside of the Netherlands is a real win for the Limburg site and is visible proof of the ambition to improve the conditions for electric cars. Thank you very much for choosing Limburg. We wish the new station so many charging sessions that expansion to other locations will follow quickly."