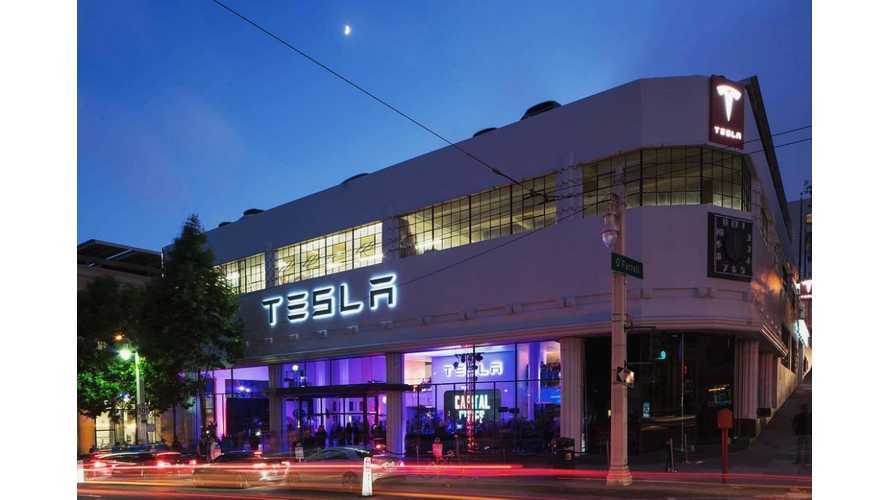 From the beginning, short sellers assumed those shopping for a Tesla were earth-loving hippies with little in the way of disposable income. But shopping for a Tesla is different. Unlike legacy automakers who use third-party car dealerships, Tesla sells direct-to-consumer in high-end malls and fashionable shopping districts.

Above: A look inside the Tesla store (Image: Tesla)

Back in 2016, CNBC reported that "malls boasting a Tesla shop generate more sales than their peers." Last year, Tesla claimed (via Electrek) that "their sales per square foot are dwarfing Apple’s, which has been leading the retail industry in this metric for years now." CEO Elon Musk said, "I think our sales per square foot are so high, you need a telescope to see who’s in second place."

Meanwhile, this year, The Street's Jonas Elmerraji reports that location data firm Factual tracked retail foot traffic at Tesla's stores. In contrast to the 'hippie' stereotype, Factual found that Tesla shoppers were "young and successful... Tesla store visitors were 109% more likely to have an annual income between $150,000 and $175,000, and 40% more likely to be between the ages of 35 and 44."

And, according to Factual, the top-ten dealership brands most likely to be visited by someone in a Tesla store are:

According to Elmerraji, "Most of those shouldn't come as a huge surprise given Tesla's current high average selling-price mix. But others, like Honda and Volkswagen, confirm what Elon Musk pointed out on the company's second-quarter update: ' drawing customers from many other segments, including non-premiums, sedans and hatchbacks.'"

In addition, the data "suggests that the prototypical Tesla store visitor is in a very desirable consumer demographic: Other retailers frequented by the Tesla trope include Apple, Nordstrom, Lululemon and Crate & Barrel. That's not a shock, given that Tesla hired George Blankenship, the guy behind Apple's retail presence, to build out its own store network."

Above: The "Design Studio" inside a Tesla store (Image: Tesla)

*Editor’s Note: EVANNEX, which also sells aftermarket gear for Teslas, has kindly allowed us to share some of its content with our readers, free of charge. Our thanks go out to EVANNEX. Check out the site here.
++