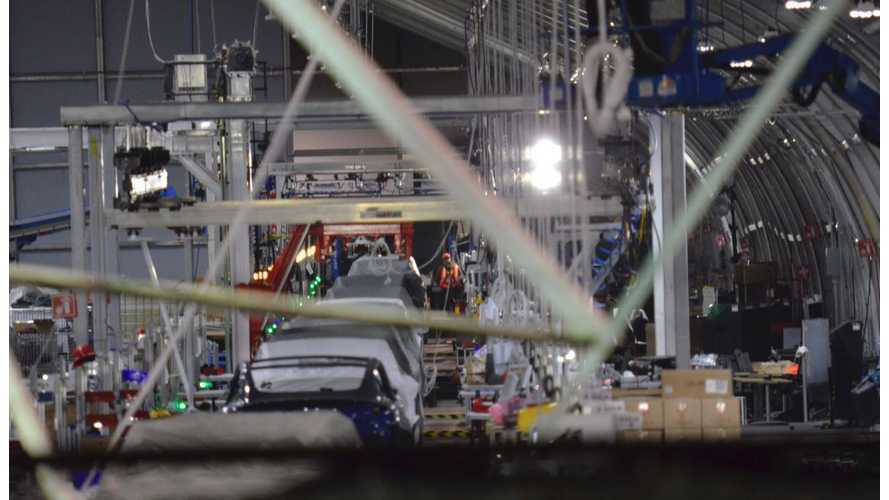 Early last week, news spread of a new tent or small exterior building that was being constructed at Tesla's facility in Fremont, California. Initially very little was known about the purpose of the structure.

Some speculated that it was housing Model 3's that Tesla would be stockpiling before the end of the month. Or perhaps the space would be utilized for last minute adjustments to vehicles with QA issues. However, Musk soon confirmed that the facility would house a 3rd Model 3 general assembly line.

Musk certainly is enthusiastic about the line. Yet we don't know what Tesla's long term plans for it are. It has been pointed out that automation on this new line appears limited. Musk tweeted the first dual motor Model 3 rolling off this newly constructed line. It is possible that the new facility will be limited to a portion of AWD assembly. This could help keep complexity down on the main assembly lines.

A recent article by quartz discusses a lot of the same points that have been covered elsewhere. Some additional details seem to be confirmed in their story.

In our previous article, we pointed out that despite many referring to the building as a 'tent', it is likely a Sprung structure. Much sturdier than a tent, the facility is more permanent than it sounds.  They are often used for temporary buildings at churches, schools, entertainment venues etc. According to Quartz, building permits refer to it as a "Tesla Sprung 3 Temporary Structure" as expected.

Also interesting is a short video that chronicles the construction over the course of 3 weeks. It was created from satellite imagery captured by Planet Labs. Since it is not a video that we can easily embed, you can click the link below to view in a larger format.