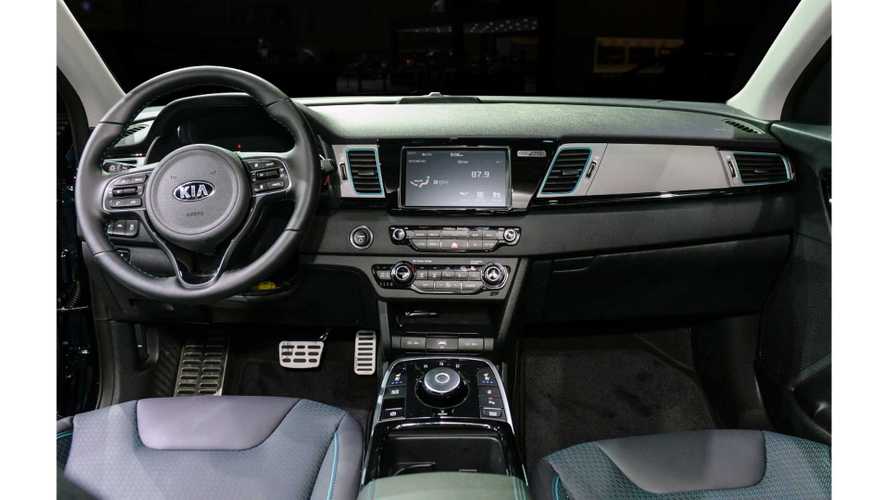 A tidy place to spend time.

Kia is increasing its plug-in offerings by adding the Niro EV to its lineup. With its exterior recently revealed, first at the 5th International Electric Vehicle Expo on the island of Jeju, and then again even more officially at the Busan Motor Show, we had been left wondering what the interior looks like. Well, wonder no more.

While on the floor of Korea's premiere automobile exposition, the crowds were allowed access to at least one Niro EV example and, lucky for us, a very savvy José Guerrero took full advantage of the opportunity and crawled all over the inside with his camera rolling. He also narrates his many observations in Spanish, which he has supplied English subtitles for over the first four minutes of the seven-minute video.

As you can see, Guerrero is quite excited by the all-electric crossover and happily remarks on elements that have made it to the production version, such as the rotary gear selector and the parking brake button in place of a foot-actuated lever. As he points out the paddles behind the steering wheel which appear to modulate the regenerative braking effect, he is equally animated.

Other smalls details he singles out which delight him (and us) include small touches like the retractable cup holders within the armrest to the wireless charging surface in a cubby hole near the bottom of the center stack. We were also happy to see a USB port in addition to the twin 12-volt outlets.

After a quick examination of the charging point on the nose of the car and a look some posted specs, our host makes his way to the rear of the vehicle and explores its ample storage capabilities. Finally, he moves to the rear passenger compartment. Here, he notes an AC outlet capable of 200-watt output. It is also at this point that we notice that this particular model is outfitted with a sun roof over the front seats.

The Kia Niro EV is said to begin deliveries in the second half of this year in its native South Korea. We believe it is coming to the U.S. as well, though the automaker couldn't comment on those plans when we reached out to them. Kia also offers the all-electric Soul EV, which will be new and improved for 2019 and share the same platform as the Niro EV, along with the Hyundai Kona Electric.