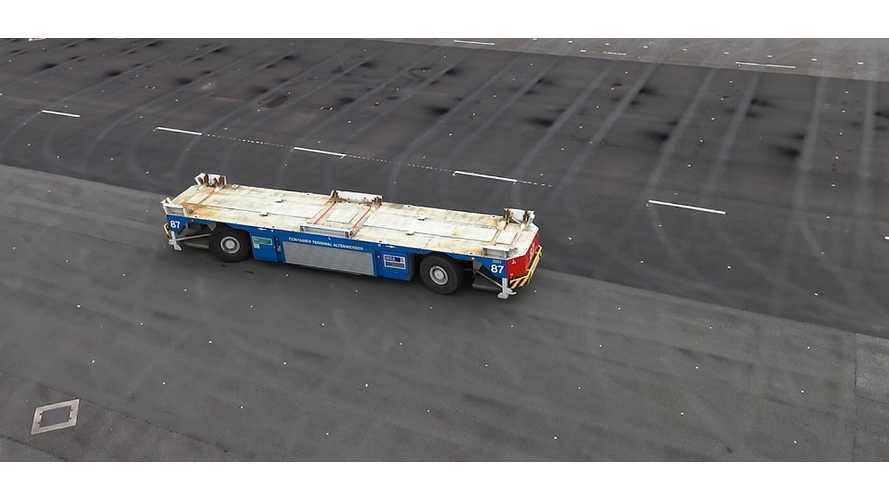 The Konecranes Gottwald AGV Lithium-Ion is unmanned work-horse that eliminates emission where it's really needed.

HHLA ordered last year 25 AGV Lithium-Ion and expects that will replace entire fleet of almost 100 vehicles by the end of 2022.

"The first serially-produced container transporter powered by a lithium-ion battery was delivered to CTA. The lithium-ion AGV, weighing 26.5 tonnes, was brought by heavy transport on 1 August. Diesel-powered AGV at CTA will be replaced step by step.

Further deliveries will follow in the coming years, meaning that the fleet of almost 100 AGVs will be completely powered by lithium-ion batteries by the end of 2022. As opposed to the lead-acid batteries powering AGVs used up to now at CTA, lithium-ion technology stands out due to, among other factors, its fast-charging capabilities. They can be fully charged in around an hour and a half, weigh only a third of a standard lead-acid battery and need no maintenance. By using green energy, the battery-powered AGVs at CTA transport containers between ships and the yard without emitting CO2, nitric oxide or particulate matter. This makes them an important part of the sustainability activities of HHLA.

“By employing lithium-ion AGVs, we are contributing to the purification of air in Hamburg,” explains CTA Managing Director Ingo Witte. Using environmentally friendly transports also pays off from an economic point of view: “Taking the ratio of energy consumed to actual power output into account, they are three times more efficient than their diesel-powered predecessors.”

A pilot project to test a lithium-ion AGV prototype coupled with an automatic electric charging station has been under way at CTA since autumn 2016. From 1 August, serially-produced lithium-ion AGVs are being delivered to Hamburg weekly from the Konecranes yard in Düsseldorf. They are initially replacing the first generation of diesel-powered vehicles at CTA, followed by the second generation of diesel-electric AGVs and finally phasing out the lead-acid battery-powered vehicles. The entire switch should be completed by the end of 2022.

Through the usage of the new AGV generation, HHLA will reduce its yearly emissions of CO2 and nitric oxide by approximately 15,550 tonnes and 118 tonnes, respectively. However, emissions at CTA will decrease substantially in the coming weeks as the first machines to be put out of service will be the diesel AGVs."