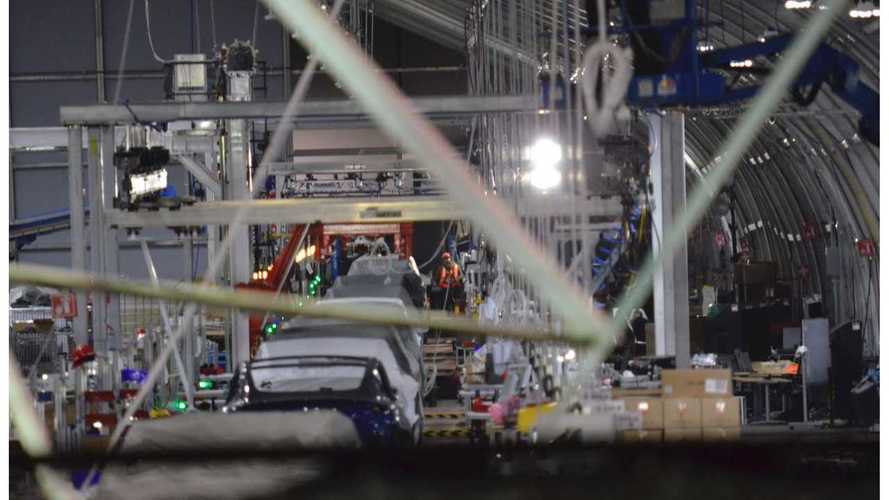 June is going to be a big month for Tesla.

It's the end of the quarter, when Tesla delivers as many vehicles as possible. Canadian deliveries truly began in earnest this month. Tesla is on the verge of passing 200,000 units sold, triggering the tax credit phase out soon.  Musk has persistently stated they will to hit 5,000 Model 3's produced per week by the end of June.

All these factors and more are turning even greater attention to the Silicon Valley automaker than usual. What better way to top it all off than with a huge freaking tent.

In a series of tweets this week, Musk explained that the team was able to build a new assembly line using 'scrap' they had sitting around in warehouses. Around the line, they constructed a large temporary building. This was done quicker and cheaper than constructing a full building. The facility is being referred to as a 'tent' by Musk and others. However, it is speculated by many to be a somewhat more permanent Sprung structure.

Musk praised his team for thinking outside the box and believes that the new temporary assembly line is 'way better than the other GA line'.

So far, we don't know to what extent this will impact June deliveries. How many Model 3's are going to be rolling off the new temporary line? Will daily production numbers stay consistent?

It's been suggested that only all-wheel drive and performance models will be produced here. This could make sense, if upgrades to the existing lines would have been needed. The tent potentially prevented a 3rd production shut down this quarter.

If this is the primary reason, the temporary line could be taken down at some point in Q3. Or perhaps not - Elon seems content to keep the tent as is:

Well, no matter what Tesla's intentions are, this is a pretty clever way to boost production at the end of the quarter.

High res photos of the length of the $TSLA tent assembly line.From the last 24 hours.

Follow @ispytsla, who's nudging me into retirement, for videos. pic.twitter.com/t5AJOz1fYK

This is the alien dreadnaught Elon promised: hand-building cars. pic.twitter.com/LgDOBncZze

This is the alien dreadnaught Elon promised: hand-building cars. pic.twitter.com/LgDOBncZze

View of the line. pic.twitter.com/RlcdiklWPA

Our old friend. The car that never moves. pic.twitter.com/Jr6xRr2mk8

Work being done on the other side of the tent as well. pic.twitter.com/c3Lo9wRVtF