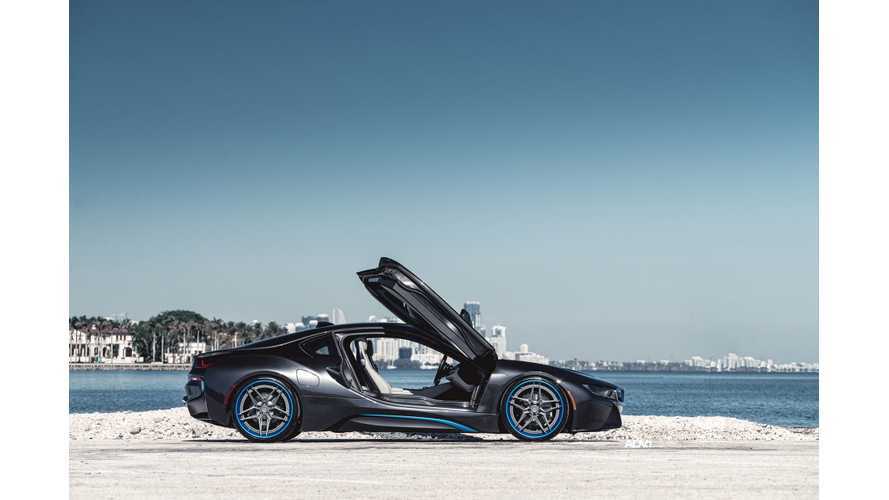 Check out this aggressive BMW i8 with ADV510 track spec advanced series wheels.

Ever since its introduction, the BMW i8 hasn't stopped dividing the populace. This high-performance hybrid model from the Bavarian car maker is both a fantastic look into the future of the car culture, but also, a clear showcase of what's possible with heritage car makers. Unlike Tesla Motors - who produces only fully electric vehicles - BMW decided to go in the hybrid direction. This resulted in a supercar that brings on futuristic design, alongside an eco-friendly high-performance nature.

For the most part, the BMW i8 is a step forward in the evolution of the sports car, which will – somewhere down the road – yield a fully electric supercar by the German car maker. Coming with a powerful powertrain and impressive fuel economy, the BMW i8 ticks both the performance and ease of uses boxes. After all, the hybrid motor powering this vehicle can be filled up in mere minutes, while producing a similar level of low RPM torque and power.

The powertrain, developed specifically for this model, is a combination of a 1.5-liter three-cylinder petrol engine and a set of highly efficient electric motors, powering all four wheels of this vehicle. The combustion engine develops 170 kW/231 hp and drives the rear wheels of the BMW i8. The  96 kW/131 hp electric drive, on the other hand, joins in the power generation and provides traction for the front wheels. Together, this combination yields a power rating of 374 hp and 570 Nm of torque. In turn, this combination allows for an all-electric range of up to 35 kilometers (22 miles) and a top speed of 120 km/h (75 mph).

Performance wise, the BMW i8 will have no problem with most performance cars it encounters on the roads today. The i8 will sprint from 0-62mph (0-100km/h) in just 4.2 seconds and reach an electronically limited top speed of 155mph (250km/h), all the while, having a company stated NEDC-equivalent values for fuel consumption at 1.8l/100km and power consumption of 14.0kWh/100 kilometers. This equates to CO2 emissions of up to 42 g/km. In comparison, the Tesla Motors factory figures state that the Model S P90D has a 20.0 kWh/100 km rating, joined by a 2.2l/100km equivalent fuel consumption. The company figures for CO2 emissions state that a Model S produces 28g of CO2 per kilometer.

In reality, the BMW i8 is a highly coveted performance hybrid. The futuristic looks and impressive performance mean that its sold in great numbers, yielding a common first world problem for their owners: there's so much of them on the roads today. To some, adding a level of customization is needed in order to separate their vehicle from the rest of the pack. Cue the aftermarket wheel industry.

This particular Sophisto Gray Metallic BMW i8 is upgraded with ADV.1 Wheels, giving it a much more aggressive appeal. The i8 in question received a set of Advanced Series by ADV.1 Wheels. These newly-released wheels feature contemporary designs matched with improved back-pocketing, resulting in excess material removal and improved weight reduction - a highly coveted feature for any hybrid and electric vehicle. Additionally, the wheels also feature complete titanium hardware, resulting in even less weight for the unsprung mass of this vehicle - producing improved acceleration and handling characteristics.

The ADV510 Track Spec Advanced Series wheels installed on this BMW i8 come sized 22×9 and 22×10.5 in the front and rear, respectively. In order to match the Sophisto Gray Metallic w/ BMW iElectric Blue accent finish combination of the vehicle itself, the wheels feature a similar color scheme: the front face of the wheels is finished in a Fine Textured Gunmetal finish, while the lips feature Polished Matte Blue accents. The end result is a BMW i8 with a much more aggressive stance and improved overall exterior appeal. You can grab a detailed look at the complete media gallery of this vehicle right below.