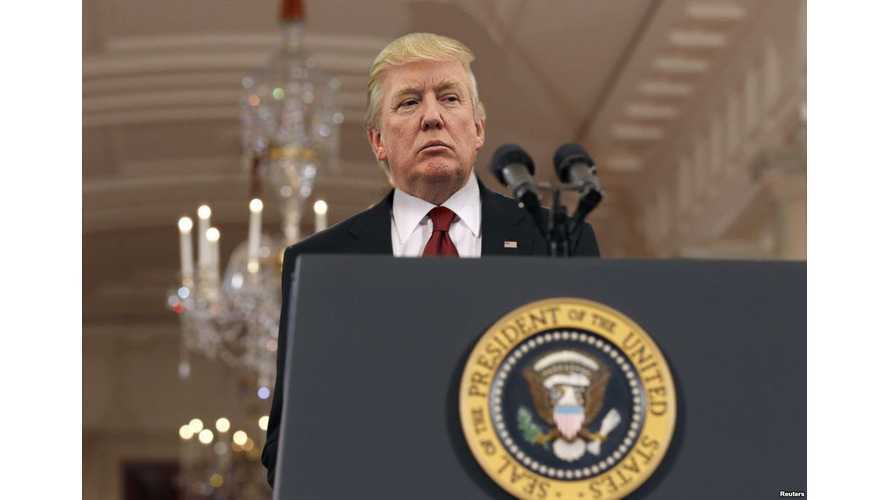 In addition, the proposal would freeze federal fuel efficiency standards and restrict the ability of the California Air Resource Board to regulate Greenhouse Gases.

It was pretty much a given that the Environmental Protection Agency (EPA) and National Highway Traffic Safety Administration (NHTSA) were going to propose a freeze of greenhouse gas (GHG) and fuel economy standards. There was even plenty of speculation that the federal government might challenge California Air Resource Board's (CARB) ability to regulate green house gases. As expected, the current preferred proposal revealed on Thursday would freeze federal standards at 2020 levels and challenge CARB's emission standards.

However, the attempted challenge to CARB's ZEV mandate came as more of a surprise. According to the 1,217 page document released on Thursday:

In this proposal, EPA is proposing to withdraw the waiver granted to California in 2013 for the GHG and ZEV requirements of its Advanced Clean Cars program

Attempting to solve climate change, even in part, through the Section 209 waiver provision is fundamentally different from that section’s original purpose of addressing smog related air quality problems. When California was merely trying to solve its air quality issues, there was a relatively-straightforward technology solution to the problems, implementation of which did not affect how consumers lived and drove.

Such a challenge to precedent would be difficult to argue. Even divorced from the greenhouse gas and climate change argument, it is not possible to claim that a Zero Emission Vehicle (ZEV) would not improve air quality. In addition, waivers on the ZEV mandate were granted under the Barack Obama, George W Bush, and preceding administrations. According to the EPA in 2006:

By this decision, issued under section 209(b) of the Clean Air Act, as amended, (hereafter ‘‘Act’’), 42 U.S.C. 7543(b), the Environmental Protection Agency (EPA) today has determined that provisions of the California Air Resources Board‘s (CARB’s) 1999–2003 amendments to the California Zero Emission Vehicle (ZEV) regulations as they affect 2006 and prior model years (MYs) are within-the-scope of previous waivers of federal preemption granted to California for its ZEV regulations. In the alternative, EPA is also granting a waiver of federal preemption for these MYs. EPA is also granting Californias request for a waiver of federal preemption to enforce provisions of the ZEV regulations as they affect 2007 through 2011 MYs.

More About EPA and NHTSA Standards

For a bit of history on the Clean Car Standards and the California Air Resources Board, we recommend this series of tweets from CARB Chair Mary Nichols. Follow the link in the tweet for the full string:

Freezing fuel economy standards for the sake of "safety".

Despite the claim that an efficiency freeze is in the best interest of consumers and automakers, neither seems enthusiastic about the move or the coming legal battle with California. Automotive unions believe this will make American manufacturing less competitive in the global landscape.

According to Vox, Wade Newton, a spokesperson for the Alliance of Automobile Manufacturer stated:

While we have said that re-opening the midterm review was the right thing to do, the Alliance has long said that we support year-over-year increases in fuel economy.

Fuel economy standards should be strengthened, not weakened  (...) This is overwhelmingly the opinion of the scientific community.

Following the official release of the proposal, the Alliance said in a statement:

We urge California and the federal government to find a common sense solution that sets continued increases in vehicle efficiency standards while also meeting the needs of America’s drivers.

The proposal did garner unbridled praise from one lobbying group, however. Thomas J. Pyle of the oil and gas lobbying group American Energy Alliance trumpeted:

What started as a mandate in the mid-1970's to reduce foreign imports of oil morphed into a costly and unworkable environmental regulation thanks to bureaucrats in the previous administration and in Sacramento. (...) President Trump should be commended for standing up for American consumers by reducing the regulatory burden placed unnecessarily on automakers.

However, consumers across party lines overwhelmingly support increased fuel economy standards. According to a Consumer Reports survey of 1,094 licensed drivers, 85% of Americans support continued improved fuel economy for all vehicle types. Only 43% believe that automakers are currently succeeding at making fuel-efficient vehicles. Perhaps this is why the EPA and NHTSA instead chose to frame high fuel economy standards as a threat to the safety of drivers.

There is very little supportive evidence for the often debunked safety claims made in their proposal. However, if you’d like to read the “SAFE” document it is included below.

According to several reports, even within the Trump administration, there is dissent. The Houston Chronicle states that top officials in the EPA do not believe the justifications presented will stand up to legal scrutiny. According to the Washington Post, officials at the Office of Transportation and Air Quality state that the proposal contained "a wide range of errors, use of outdated data, and unsupported assumptions."

We expect a long and drawn out legal battle should the administration move forward with this proposal.

CARB and federal agencies will soon begin negotiations. It should go without saying that we here at InsideEVs support the mission of CARB, the ZEV Mandate and the continued increase of Clean Car Standards.

New EPA administrator Andrew Wheeler recently overturned a Scott Pruitt reversal on dirty "glider" trucks and the agency has indicated they are open to alternative proposals. If you would like to make your voices heard, the comment period on the proposed rules will be 60 days. You can submit your comment at regulations.gov.  You can also follow this link to comment.

The full 1,200+ document and California Waiver Withdrawl FAQ can be viewed below: