A new take on the tortoise and hare?

We love a good electric vehicle race. Because of their unique nature, contests between battery-powered machines don't have to be limited to drag races or laps around Laguna Seca, though. As famous EV YouTuber Bjorn Nyland shows us in his latest production, it's possible to stage an interesting (and safe) competition between two cars out in the wild. 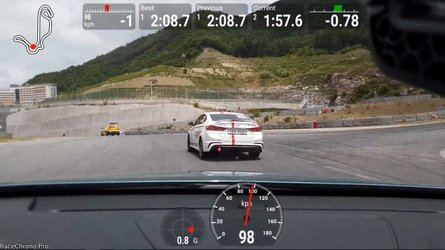 For this particular contest, we have the Tesla Model X facing off against the Hyundai Kona Electric. Aided by his friend Pawel Dalene behind the wheel of his Californian SUV, dubbed Optimus Prime, and himself piloting the newcomer from Korea, the pair set off on a 600-mile trip. The ground rules are basically that neither can exceed the speed limit by more than ten percent.

In what comes down to a race of charging speeds and tactics— not to mention overall efficiency — the Tesla can take advantage of the super-fast Supercharger network, which can be as fast as 120 kW, while the Hyundai is stuck dealing with 50 kW maximum rate. Another wrinkle? The 26-kWh capacity difference in the batteries of the two. Yet another? The Kona Electric is much more efficient than the Model X.

As you may have noticed the video here is just over an hour long. While that might seem a bit lengthy, the footage comes from both vehicles and is well edited, so the time passes pretty quickly. And no, we aren't going to give the results away. So, watch away and enjoy! Don't forget to let us know what you think of the result in Comments.

A race between Hyundai Kona Electric and Tesla Model X P90DL. It went from Oslo to Trondheim and back again, almost 1000 km/600 mi.