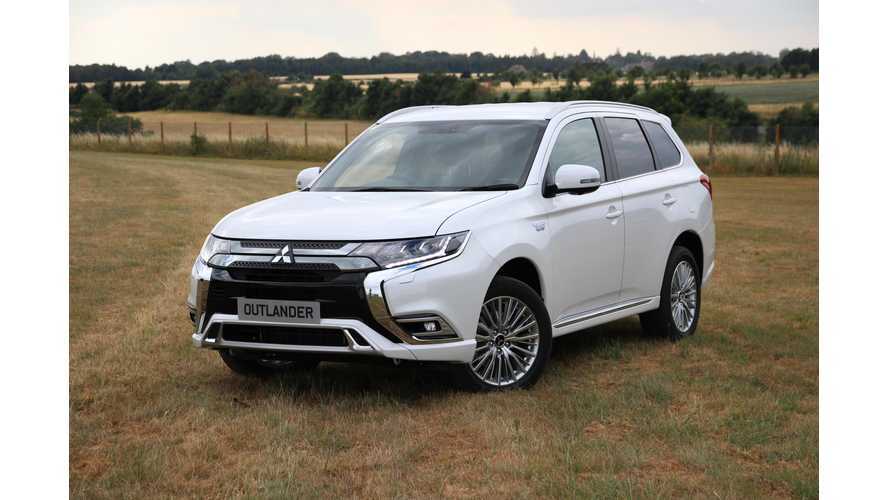 Mitsubishi just announced pricing and specifications for the 2019 Outlander PHEV for the British market, which gets first deliveries in Europe.

With a 13.8 kWh battery and 28 miles (45 km) of all-electric range (WLTP) the new Outlander has big chances of remaining on the top of the sales chart for PHEVa for 2018.

More details on changes for the 2019 model year here.

More about the offer:

The new 2019 Mitsubishi Outlander PHEV has been designed to meet the new latest emissions regulations and comfortably qualifies for the government plug-in car grant thanks to its WLTP emissions of 46g/km and EV range of 28 miles, this also attracts the lowest possible BIK rate of 13 percent.

The Mitsubishi Outlander PHEV has been updated for 2019. A new 2.4-litre petrol engine produces 135ps (up from 121ps) with greater torque (211Nm vs 190Nm). The rear electric motor output increases to 95ps and the drive battery benefits from a 10% increase in output, the overall capacity is increased to 13.8kWh, all of this results in WLTP combined fuel economy of 139mpg.

To complement the drivetrain enhancements, a number of other changes ensure the Mitsubishi Outlander PHEV is even more pleasurable to drive. The front and rear shock absorbers have been revised to improve its low-speed ride and a new “Sport Mode” brings with it sharper throttle responsiveness and more grip via the Super All-Wheel Control system. The steering ratio has also been revised and the power steering ECU re-mapped to offer more responsiveness and feel, while larger front brake discs boosts stopping power. There’s also a new Snow mode to improve low-grip launching and cornering abilities on slippery surfaces.

The Outlander PHEV features Smartphone Link Display Audio which includes Apple CarPlay and Android Auto compatibility. An electronic pre-heater (and air-con) function is also standard and is complimented with heated front seats, heated windscreen and dual-zone climate control. An electronic parking brake with brake auto hold, is located in the centre console, along with the Sport Mode and the EV priority switch. Other key features include keyless operation system with Start/Stop button, front fog lamps, LED daytime running lamps and a remote smartphone app compatibility. All of these key features are standard in the entry-level Mitsubishi Outlander PHEV Juro which is priced from £34,255*.

The Outlander PHEV 4h builds on the already well-specified Juro with added safety equipment such as a 360° camera, blind-spot warning, and rear-cross traffic alert. Other additions include the all new black headlining which compliments the black leather interior, an 8-way electric powered driver’s seat, heated steering wheel and power tailgate. Lighting is enhanced with LED headlamps, LED High Beam and LED front fog lamps. The 4h variant is priced from £37,000*.

Completing the line-up is the 4hs specification, which adds a host of safety equipment such as Adaptive Cruise Control, Forward Collision Mitigation and Lane Departure Warning. Also included are front and rear parking sensors, Auto High-Beam and an Unintended acceleration Mitigation System. The 4hs variant is priced from £39,100*.

The new 2019 Mitsubishi Outlander PHEV is now on sale in the UK.

*On the road prices include VED, first reg fee and also include the £2,500 Plug-In Car Grant