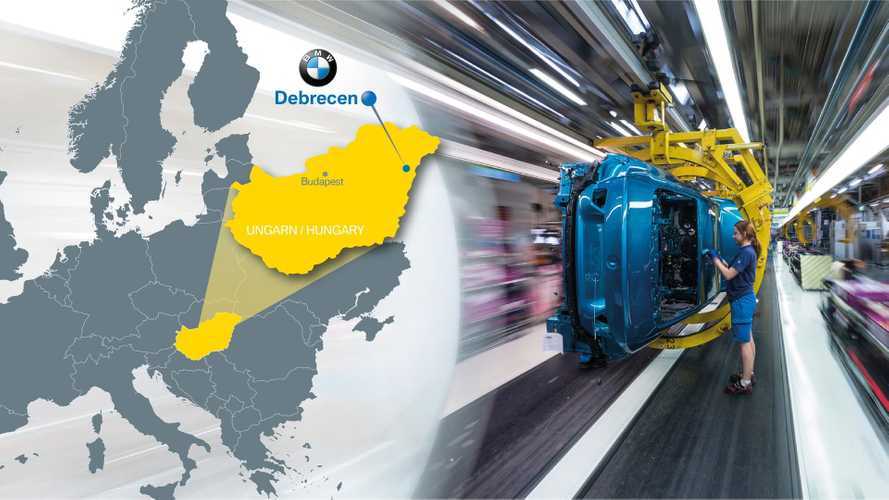 BMW Group intends to strengthen its European production capacity by launching a new car plant near Debrecen, Hungary for both electrified and conventional models.

Europe is still the biggest market for BMW (1.1 million or 45% of total sales) so the additional factory for 150,000 cars annually will be modest expansion. It wasn't said what models will be produced there yet.

The investment is estimated at €1 billion ($1.17 billion), which more or less is the same the company is spending on the upgrades of plants in Germany to prepare them for electric mobility.

Hungary is an attractive country to BMW because the proximity of battery supplier - Samsung SDI - which opened a battery plant in Goed, 30 kilometers north of Budapest, Hungary.

"Debrecen is the ideal place for the BMW Group to expand its production network. It was chosen primarily for its very good infrastructure, suitable logistics connections and proximity to the established supplier network. The qualified personnel in the local area were another key advantage. Besides the team at the plant itself, numerous jobs will be created with suppliers and service providers, both within the grounds of the new facility and across the local region.

The BMW Group has been operating a representative office in Hungary since 2004 and enjoys long-standing, positive relations with suppliers in the country. Last year materials and services worth €1.4 billion were purchased in Hungary.

The plant in Debrecen will set new standards in digitalisation, sustainability and flexibility. In addition, it will be a technology leader, with innovative solutions for automation, state-of-the-art assistance systems and flexible logistics applications. In keeping with the BMW Group’s principle of the highly flexible production system, the new facility will manufacture conventionally as well as electrically powered vehicles, all on a single production line."

Harald Krüger, Chairman of the BMW AG Board of Management said:

“The BMW Group’s decision to build this new plant reaffirms our perspective for global growth. After significant investments in China, Mexico and the USA, we are now strengthening our activities in Europe to maintain a worldwide balance of production between Asia, America and our home continent. Europe is the BMW Group’s largest production location. In 2018 alone we are investing more than €1 billion in our German sites to upgrade and prepare them for electric mobility.”

“In the future, every BMW Group plant in Europe will be equipped to produce electrified as well as conventional vehicles. Our new plant in Hungary will also be able to manufacture both combustion and electrified BMW models – all on a single production line. It will bring greater capacity to our worldwide production network. When production commences, the plant will set new standards in flexibility, digitalisation and productivity.”