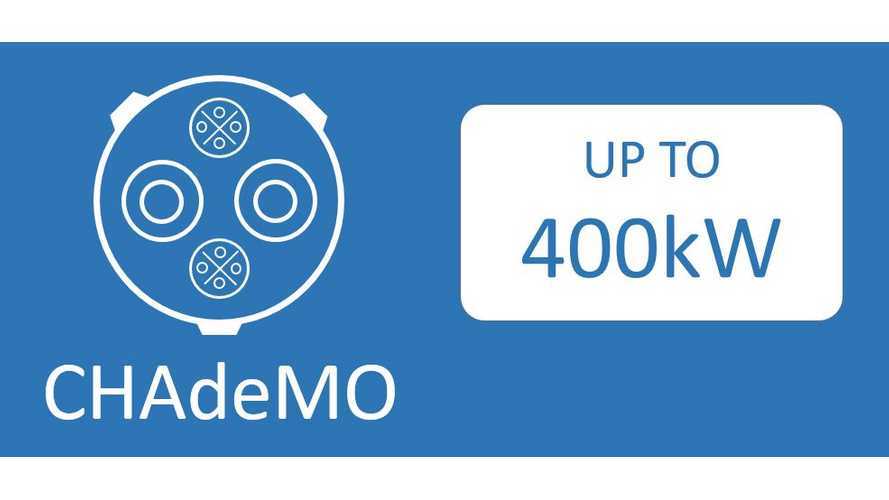 CHAdeMO Association just released its new 2.0 version of the fast charging standard that maintains backward compatibility and now offers up to 400 kW of power.

The significant increase in power (compared to 200 kW in v1.2) was possible thanks to doubling the voltage from 500 to 1,000 V at a maximum current of 400 A (which requires a liquid-cooled cable).

The new version of the protocol also incorporates a plug-and-charge (PnC) functionality, that enables automatic authentication and billing when the plug is inserted into the electric vehicle charging inlet. That means CHAdeMO matched CCS Combo functionality and exceeded its power limit (up to 350 kW).

"The new version of CHAdeMO is also compatible with a CHAdeMO plug-and-charge (PnC) functionality that will make the EV users lives even easier. With the CHAdeMO PnC functionality, the users will have to simply insert the CHAdeMO plug into the EV’s inlet, and the authentication and billing will be done automatically."

CHAdeMO has advantages over the CCS standard because there is a single type of connector worldwide, while CCS divides into two incompatible (J1227 CCS 1 in North America and some other countries, and CCS 2 in Europe and most of the rest of the world). The other strong point for CHAdeMO is the capability of bi-directional charging V2X widely demonstrated around the world.

The new higher power CHAdeMO will be useful for the trucks and buses, but the CHAdeMO Association doesn't want to stop there and is trying to use the protocol communication for pantographs or even wireless charging.

"CHAdeMO’s original protocol was released in 2009. Since then, the Association has amended the standard a couple of times to incorporate the required changes through its almost a decade-long in-market experience, but this new version is the first major protocol revision since CHAdeMO 1.0 was published in 2012.CHAdeMO has already enabled in its Version 1.2 (published in March 2017) high-power charging up to 200kW (400A x 500V). CHAdeMO 2.0 now allows for up to 400kW, making high-voltage charging up to 1kV possible using liquid-cooled cable assemblies (still with the exact same CHAdeMO plug shape) or via pantographs. In case of charging with the plug, backward compatibility is ensured, meaning the high-power CHAdeMO chargers can feed power to both the current EVs as well as the upcoming EVs with higher-power charging capability.

CHAdeMO’s Secretary General Dave Yoshida said: “The publication of the new version of the protocol is part of our broader efforts to expand the CHAdeMO protocol to a wider variety of vehicles, including trucks and buses. With the CAN-based communication, it will be a relatively simple but reliable option to charge large commercial vehicles and other industrial applications. Combining these vehicles with the V2X technology, for which CHAdeMO is the only enabler today amongst the major international charging standards with readily available products in the market, fleet owners would benefit from an even larger set of options to rethink the TCO (total cost of ownership) of their vehicles, as these vehicles can not only charge but discharge electricity and support the Grid.”"

"CHAdeMO technical representatives continue to actively participate in the IEC Committee’s standardisation work for high-power and bus charging, where, together with other international experts, they are preparing a revision of the DC high power standards, based on the IEC standards published in 2014. This latest CHAdeMO protocol is released in advance to the revision work at IEC.To celebrate the publication of CHAdeMO 2.0 and to ensure the development of high-power CHAdeMO chargers, the Association is organising a technical demo event in Lucerne next week for its members and shall report on the progress shortly."