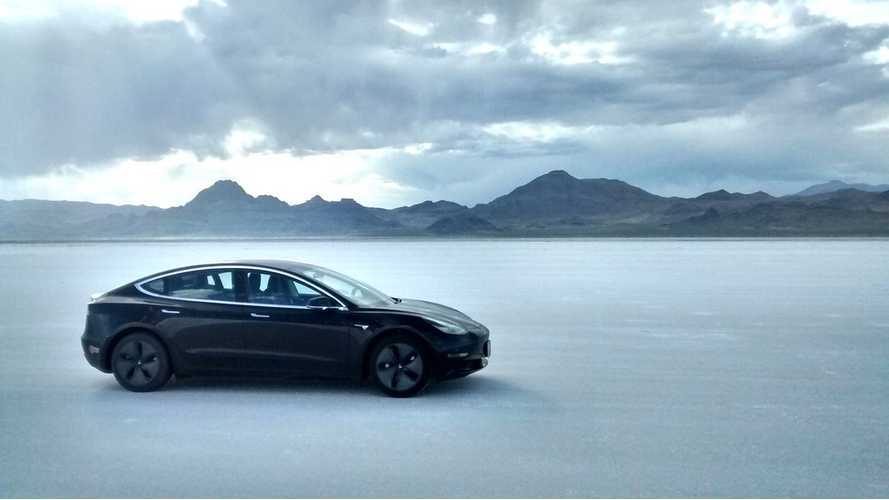 Truly the best way to be salty

The Bonneville Salt Flats are best known as a unique expanse of landscape on which many people have made their mark in motorsports, setting land speed records in an unimaginably huge array of vehicles. Looking at the electric side of things, as we are wont to do, we've seen salty record-breaking, battery-powered performances from the likes of Venturi/Ohio State in the VBB-3 and Eva Håkansson in her KillaJoule, among others.

Watch Tesla Model 3 Put Through The Paces At Laguna Seca

Now, a Tesla Model 3 has found its way onto this unique terrain. While it wasn't seeking land speed glory — on this trip, at least — its owner did zip up to 90 miles per hour on the somewhat damp surface. Lucky for us, he recorded the experience from inside the cabin, while friends filmed from the outside.

The car in question here belongs to one Michael Striker, who is an equipment maintenance technician for Tesla. Black, and answering to the name of Trinity, it appears to have carried him to a number of picturesque locales on the West side of the country, including the Tesla Gigafactory 1. On this particular occasion, he was actually on his way back from a trip to Columbus Ohio where he attended the high school graduation of one of his sisters. As an aside, she was valedictorian, as were her brother and three other sisters.

If you'll remember, employees were among the very first to take delivery of the Model 3, beginning at the big handover event in July of 2017. Striker tells InsideEVs that he took possession of his near the end of November last year. If you scroll through his Twitter feed, you'll see he's been enjoying it.

Speaking of enjoyment, Striker writes that this short stint at the Saltflats was "One of the most awesome experiences had in my Trinity!" Now bitten by the salt bug, he plans to eventually return and try a flat-out run, hopefully hitting the 140 mph top speed of the baby Tesla. When that happens, we'll definitely show you the results, which should include some drone footage.