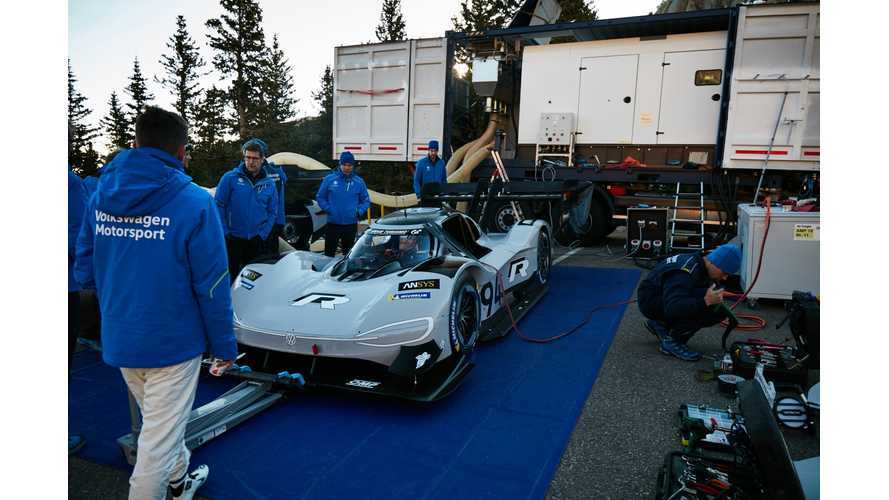 Volkswagen Motorsport overcomes obstacles in developing a rapid-charge strategy for competing in the historic hill climb.

The Broadmoor Pike's Peak Hill Climb is a 12.4-mile, 156-turn course in Colorado. Racers start at nearly 9,400 feet above sea level and climb 4,720 feet to an elevation of 14,115 feet. All sorts of vehicles compete including traditional high powered ICE cars, motorcycles, and electric vehicles.

Internal combustion engines can lose a significant portion of their available power as they reach higher altitudes. For competing electric vehicles, loss of power due to elevation is not really an issue.

Of course, fast charging in such a remote location can be troublesome. If there is sudden severe weather or a stalled/wrecked vehicle that needs to be recovered, drivers may need to suspend their attempt and begin from the start of the course. When this happens, the participant will have only 20 minutes to prepare for their second attempt and return to the starting line.

The team must keep the battery at an optimal temperature without excessive active cooling to avoid potential condensation. Thus the charge rate is limited to 90 kW to minimize heat but maximize charge time during the allotted 20 minutes.

Because electricity in this remote location is also an issue, the I.D. R Pikes Peak is charged by a generator run on the sugar alcohol Glycerol. VW says that the fuel combustion will produce almost no exhaust fumes or residues. Marc-Christian Bertram, head of Electrics and Electronics at Volkswagen Motorsport, explains:

The Glycerol-powered generator not only supplies the I.D. R Pikes Peak with environmentally-friendly electricity before the practice sessions and the race, but also all the electrical devices in our pit area during the race, from the engineers’ laptops to the coffee machine.

Volkswagen is far from the first automaker to compete with an electric vehicle. Faraday Future made a showing last year. A Tesla Model S P90DL has also competed in the past. Even Mitsubishi competed with an electric contender bearing the MiEV name several years ago.

But VW thinks they have what it takes to beat the current record of 8 minutes and 57.118 seconds set in 2016. If you'd like to see more about the I.D. R Pikes Peak, check out the link below.