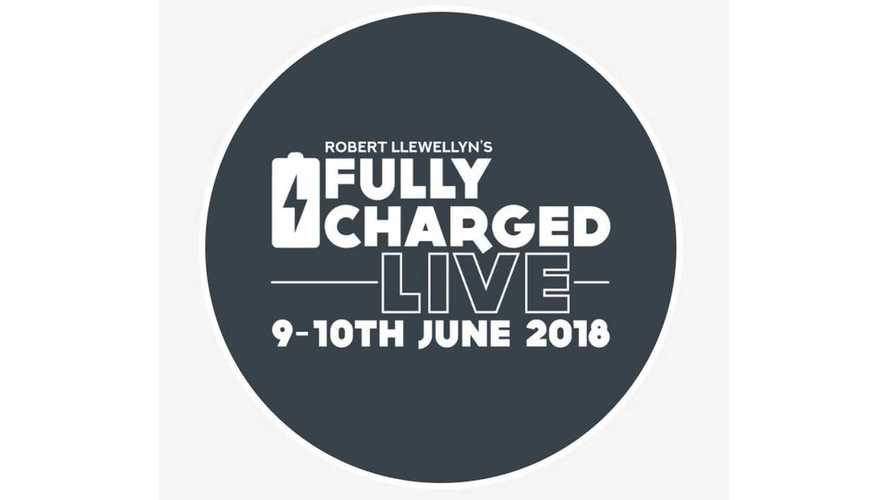 As I was on the plane for my 7-hour flight back to Toronto Canada, I had a chance to reflect on my images and experiences of this past weekend’s Fully Charged Live 2018 UK event.

Fully Charged Live was an original event, being the first of its kind of Electric Vehicle & related Industry-focused conference & show in the world. Ironically held at Silverstone Raceway in England (with British GT racing on-going), over 6,000 attendees came to learn all about this mysterious world of electric vehicles and it’s supporting eco-system.

Included in this mix of attendees were dozens of YouTube EV’ers (including myself) - most who were local to the UK and drove out in their own electric cars - some coming hundreds of miles, and then still offering to ferry hundreds of attendees from the parking areas to the exhibition and conference halls.

As the Co-Host and Producer of the EV Revolution Show based in Toronto, I felt that this event was worth traveling over 5,500 kilometers “across the pond”, since it was a groundbreaking first and like otherworldly pivotal occurrences, a must for anyone in EV circles.

I was kindly looked after and chauffeured by members of the Renault Zoe Owners Club or “RZOC” - the largest free EV Owners Club in all of Europe. By the way, the Zoe is one of Europe’s best selling all-electric Vehicles and it’s really too bad it is not offered in North America.

Getting up very early on Saturday morning in order to do the 2-hour journey up to Silverstone, it was a pleasant drive in a 40 kWh Zoe up to the site since England’s M-series motorways were unusually quiet at that time. We arrived before general admission and this gave me a chance to meet many of the vendors and organizer staff and look around while it was still quiet.

What I saw included not only every electric vehicle available to purchase in the UK on display, some from the manufacturers themselves like Nissan, Tesla (yes Tesla actually had a booth!) and Renault, but also exhibitors offering supporting technologies including home energy systems, chargers, charging networks, hardware and software systems, electric bikes and electric skateboards. There was also a display of converted classic cars such as electrified versions of a Ferrari 308 GT, a 1965 Fiat 500 and a Jaguar XJ-S. The infamous Tesla Model S “Shooting Brake” car was also there as well as the world’s only kit-built road-certified EV – the eRrod.

Along with the exhibitors and over 50 electric and electrified vehicles to look and climb around, there were inspiring guest speakers from many different organizations – some could have been seen as competitors - but all who were enthusiastically cooperating and interacting with one another for the benefit of this industry.

Fully Charged Live was an event put on by the team behind YouTube’s biggest EV and Sustainable Energy-themed show “Fully Charged”. The show has more than 300,000 subscribers and attracts over 1.6 million views a month. The British-based team of Robert Llewellyn and Jonny Smith - hosts of the show - were on hand to do everything from assembling furniture at the venue before doors opened, to moderating panels and meeting fans and fellow YouTubers.

I had a chance to meet and speak with both Robert and Jonny during the weekend.  We all agreed on the overwhelming success of the event by the number of attendees coming out. Robert and Jonny had thought that it would be a stretch to get 3,000 or so people - but to their surprise and joy over 6,000 came - all this with basically zero dollars spent on marketing! They only used their YouTube channel, Twitter and other social media outlets and word-of-mouth to spread the info.

Robert’s response to this outpouring of support stresses that “clearly our knowledge of what we have been doing for the last 150 years is not necessarily in the best interests of ourselves or the multiplicity of creatures we share this small blue dot with.  We no longer have the excuse of ignorance.”

He further states that he is “very proud of what the small team behind Fully Charged Live achieved; we all acknowledge that what really brought people together from all over the world” (I was not the only International visitor), “was the knowledge that we need to actively pursue ideas, innovation and technology that is sustainable and less damaging to the world we may be able to leave our children and grandchildren”.

I have to say they really hit the mark on this event. In conducting some polls that they did as well as my personal observations throughout the 2 days, it was apparent that the majority of attendees were people who actually don’t own an EV and are curious to get more information about this fascinating phenomenon. For this audience, there were many lecture sessions that were beginner-themed. These sessions included introduction to electric vehicles, owning an electric vehicle, what is range anxiety, EV terminology and ask the experts.

Of course, there were also hundreds of EV enthusiasts and current EV owners present in support of the cause. Including those were the aforementioned RZOC members, Tesla Owner Club of Europe members and other clubs and organizations. I even had a chance to see and talk with Chris Ramsey the host of YouTube’s “Plug in Adventures” and see his modified off-road Nissan Leaf AT-EV. It was truly awe-inspiring to hear Chris tell his stories of trips including in 2013 1,800 miles around the UK (in his 2013 Gen 1 Leaf) as well as the 2017 10,000 mile Mongol Rally in the off-road version.

I already knew from past visits to the UK that this country is ahead of our efforts in North America in promoting EV adoption and provisioning a supporting infrastructure. There is a healthy EV market with many new models to purchase experiencing delivery delays of several months. Adding to this health and uptake in EVs is the fact that a significant fast charging infrastructure exists today, beyond Tesla’s Supercharger Network, with more coming in the future. This makes road-tripping a normal experience in an EV in the UK.  I observed that when we stopped at a couple of services during our ride up and back from Silverstone, there were always some EVs charging at the available Ecotricity chargers. With the existing and still growing charging networks, stops usually needed for range anxiety have now turned into “bladder anxiety”!

A big thrill for me at the event was getting an up-close look at Jaguar’s new I-Pace, set to start limited deliveries later this year. The beautifully Photon-Red colored EV was a sight to see and was constantly surrounded by people. I can say that it is a very comfortable car to sit in (unfortunately I could not get a chance to drive it after multiple pleading attempts with the onsite Jaguar staff) and the fit and finish of this pre-production vehicle is second to none. Jaguar has a hit with the I-Pace and should carve out a nice niche for themselves in the growing luxury electric vehicle marketplace.  We hope to have an opportunity to do a more in-depth impression video in the fall timeframe when Jaguar Canada will have a media launching event.

One thing I found surprising was that there are now a few automotive dealers that only specialize in used electric vehicles. I spoke to a couple of the owners of these businesses and they tell me that this market has grown by leaps and bounds over the past two years and continues to look to further growth. One owner, Jonathan Porterfield from EcoCars, drives many of his sold vehicles over 600 miles down from the norths of Scotland - where his business is based - to southern England and the London area for personal deliveries to his customers. More proof of the UKs significant charging infrastructure put in daily practice.

I have to say on a personal level, I found the event overwhelming in a positive way. I ended up pretty well losing my voice at the end of each day by a very humbling experience - due to meeting dozens and dozens of our YouTube fans. I did not expect so much “attention” as I’m just really a regular guy who’s as excited about the EV market as they are. However, I am glad that what I do, as well as many other “home-grown” YouTubers, is making a difference in a positive way. I know many of my fellow YouTubers had a similar experience.

And after all, that is the main reason we do what we do as YouTubers. As in the words of Robert “it’s about the possibilities of the (EV and energy) technological revolution we are witnessing. More and more people are starting to get it, to understand the wider implications of the changes ahead”.

After the conclusion of Fully Charged Live 2018, there was already scuttlebutt of a return for 2019. I certainly hope so as we have a long way to go in the promotion of EV adoption and sustainable energy sources, in order to make a dent in positive climate change. We may even possibly see a Fully Charged Live - North America version one day.

I can only wish them all the best success and I’m ready to book my ticket to the next one!