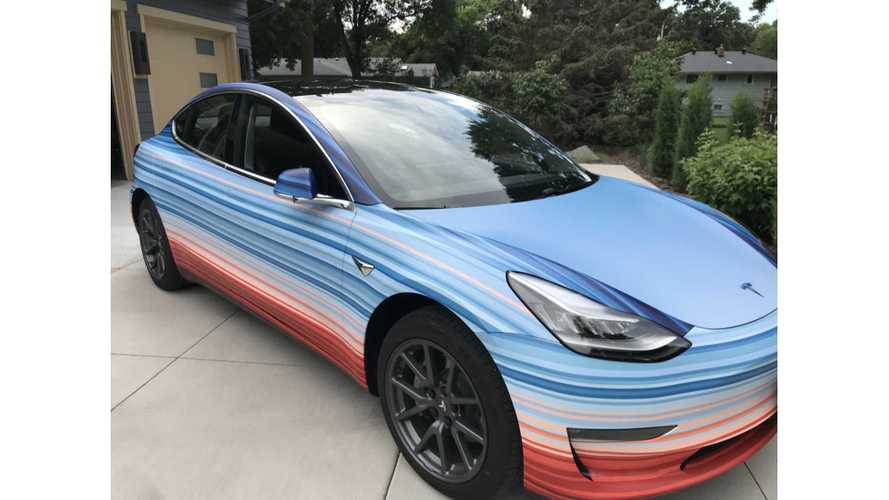 For many, words won't ever be enough to exemplify just how important a subject at hand really is. Hence, visualization is the best tool we could ever have to actually push people not only to take notice, but also, to grasp the magnitude of some of the most pressing topics we, as a humankind have. For the most part, one of those topics is definitely global warming.

Some time ago, a news story about a group of meteorologists who all wore the same ties on the summer solstice was published. It showed the change in overall Earth temperature through several centuries - a showcase that gives you a good idea of the severity of this situation - worn by the people who are most educated about the matter. And now, the move by this select group of scientists have pushed Mark Bloomquist - an owner of a pristine new Tesla Model 3 - to make a similar, rather interesting way to put people on notice on about the same issue.

While the global average temperature between the last ice age and the beginning of the industrial revolution is only about 5 degrees Celsius, everything after that is startlingly higher. Globally, the temperature rise since the industrial revolution in 1850 towards 2017 rose by a staggering 1.35 degrees Celsius, or 2.43 degrees Fahrenheit. This was all neatly showcased in a wonderful visualization by Professor Ed Hawkins at the University of Reading in Great Britain.

What this Model 3 owner did, is simply genius. He contacted his local car shop in order to turn these graphics by Professor Hawkings, into a rather cool wrap for his Model 3. In turn, Mark now has a rather fetching way to raise awareness for the global climate change. The wrap not only looks really good, but its pushing people to take notice.

I have had more conversations in the last 10 days than I have in a very long time.  At one of the events, I heard a woman using the 'warming stripes' design to show her daughter how the earth's temperature has been changing. Besides events such as the above, I have had conversations in parking lots,  while eating lunch, and almost anywhere.  Some of them about the Tesla Model 3, some about the car wrap and many about both!

Mark really did an outstanding job. Hopefully, we can all raise awareness over this critical item in a better way going forward. Mark's example serves to show us how simple ideas can be turned into something great. You can grab a look at this Tesla Model 3 with its cool temperature increase wrap in the media gallery right below.