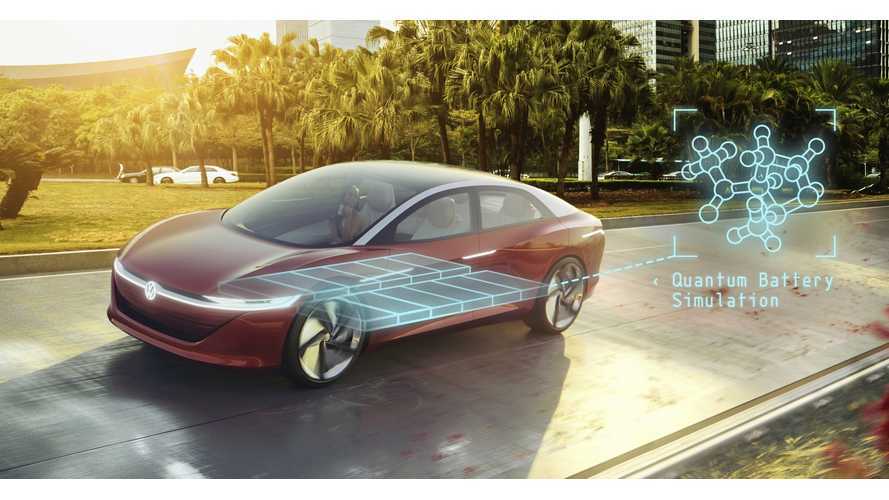 Whoever has the best battery wins. While that statement may be an oversimplification, since there are obviously a large number of other factors that come into play in the automobile business, it's still a guiding truism. One of the reasons Tesla is where it is, for example, is because from the get-go they tackled how to make the most energy-dense lithium-ion (and cheapest) battery chemistry work in an automotive application.

Volkswagen has made it clear, however, that it intends to have a large presence in this space, and is now betting big on batteries. To get from where the company is now to where it needs to be,  it's leaning on some cutting-edge technology: quantum computing. While they've been working on this for a while, tomorrow, at Europe's Business Festival for Innovation and Digitization (CEBIT), it will publicly present its research work in this area and possibly put the fear of God into its competitor's hearts.

The automaking behemoth is apparently working with both Google and D-Wave to further its quantum computing knowledge and abilities and having some success. Its scientists have already "...simulated key molecules on a quantum computer, including molecules such as lithium-hydrogen and carbon chains." Eventually, it intends to "...simulate the chemical composition of a battery on the basis of different criteria such as weight reduction, maximum power density or cell assembly, and provide a design which could be used directly for production." If successful,  it could add much need speed to the battery development process and, they say, reduce costs.

Pretty heady stuff. You can read more about the German automaker's efforts in information technology and quantum computing in the official press blast below.

Wolfsburg/Herndon, June 8, 2018. For the first time, Volkswagen experts succeeded in simulating industrially relevant molecules using a quantum computer. This is especially important for the development of high-performance electric vehicle batteries, as the experts have successfully simulated molecules such as lithium-hydrogen and carbon chains. Now they are working on more complex chemical compounds. In the long term, they want to simulate the chemical structure of a complete electric vehicle battery on a quantum computer. Their objective is to develop a “tailor-made battery”, which will be a configurable chemical blueprint that is ready for production. Volkswagen will present its research work connected with quantum computing at the CEBIT technology show (Hanover, June 12-15).

"We are focusing on the modernization of IT systems throughout the Group”, says Martin Hofmann, CIO of the Volkswagen Group. “The objective is to intensify the digitalization of work processes – to make them simpler, more secure and more efficient and to support new business models. This is why we are combining our core task with the introduction of specific key technologies for Volkswagen. These include the Internet of Things and artificial intelligence, as well as quantum computing."

The objective is a “tailor-made battery”, a configurable blueprint

Using newly developed algorithms, Volkswagen experts have laid the foundation for simulating and optimizing the chemical structure of high-performance electric vehicle batteries on a quantum computer in San Francisco, California. In the long term, the quantum algorithm could simulate the chemical composition of a battery on the basis of different criteria such as weight reduction, maximum power density or cell assembly, and provide a design which could be used directly for production. This would help significantly accelerate the battery development process, which has been time-consuming and resource-intensive to date.

“We are working hard to develop the potential of quantum computers for Volkswagen. The simulation of electrochemical materials is an important project in this context,” says Florian Neukart, Principle Scientist at Volkswagen’s CODE Lab in San Francisco. “In this field, we are performing genuine pioneering work. We are convinced that commercially available quantum computers will open up previously unimaginable opportunities. We intend to acquire the specialist knowledge we need for this purpose now”, Neukart says.

IT is co-operating closely with Volkswagen Group Research on the simulation of electrochemical materials. Volkswagen experts have already successfully simulated key molecules on a quantum computer, including molecules such as lithium-hydrogen and carbon chains. They are now working on more complex chemical compounds. In the experts’ opinion, they are only at the beginning of their development work.

Highly specialized IT experts from Volkswagen, including data scientists, computer linguists and software engineers, are working together at the IT labs in San Francisco and Munich to develop the potential of quantum computers for applications which will be beneficial for the company. The main focus is on the programming of algorithms on quantum computers. These are subject to different laws than conventional computers. In the field of quantum computing, Volkswagen Group is collaborating with Google and D-Wave, who provide the Volkswagen experts with access to their systems.