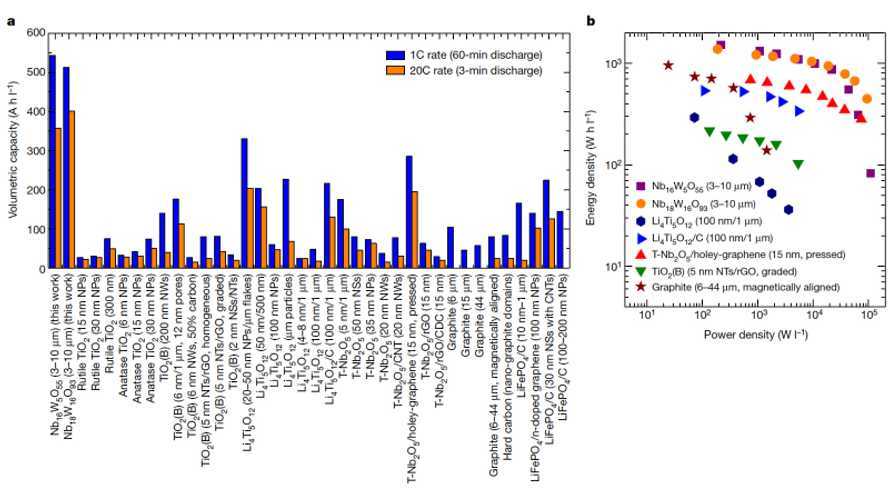 The team, consisting of researchers from the University of Cambridge, Argonne National Laboratory, Diamond Light Source, Harwell Science and Innovation Campus, have shown that micrometer-sized Nb16W5O55 and Nb18W16O93 provide higher capacity and energy density during fast charging (1C and 20 C) than nanoscale materials and formulations, which are complex and costly to make.

In other words, there is a chance that we will see batteries capable of ultra-fast charging, with decent energy density and at lower prices.

Niobium seems to be another go-to element as Toshiba is working on a new type of battery, which includes niobium, too.

Here is more about the research:

In the search for new electrode materials, researchers normally try to make the particles smaller. “The idea is that if you make the distance the lithium ions have to travel shorter, it should give you higher rate performance,” said Griffith. “But it’s difficult to make a practical battery with nanoparticles: you get a lot more unwanted chemical reactions with the electrolyte, so the battery doesn’t last as long, plus it’s expensive to make.”

“Nanoparticles can be tricky to make, which is why we’re searching for materials that inherently have the properties we’re looking for even when they are used as comparatively large micron-sized particles. This means that you don’t have to go through a complicated process to make them, which keeps costs low,” said Professor Clare Grey, also from the Department of Chemistry and the paper’s senior author. “Nanoparticles are also challenging to work with on a practical level, as they tend to be quite ‘fluffy’, so it’s difficult to pack them tightly together, which is key for a battery’s volumetric energy density.”

The niobium tungsten oxides used in the current work have a rigid, open structure that does not trap the inserted lithium, and have larger particle sizes than many other electrode materials. Griffith speculates that the reason these materials have not received attention previously is related to their complex atomic arrangements. However, he suggests that the structural complexity and mixed-metal composition are the very reasons the materials exhibit unique transport properties.

“Many battery materials are based on the same two or three crystal structures, but these niobium tungsten oxides are fundamentally different,” said Griffith. The oxides are held open by ‘pillars’ of oxygen, which enables lithium ions to move through them in three dimensions. “The oxygen pillars, or shear planes, make these materials more rigid than other battery compounds, so that, plus their open structures means that more lithium ions can move through them, and far more quickly.”

Using a technique called pulsed field gradient (PFG) nuclear magnetic resonance (NMR) spectroscopy, which is not readily applied to battery electrode materials, the researchers measured the movement of lithium ions through the oxides, and found that they moved at rates several orders of magnitude higher than typical electrode materials.

Most negative electrodes in current lithium-ion batteries are made of graphite, which has a high energy density, but when charged at high rates, tends to form spindly lithium metal fibres known as dendrites, which can create a short-circuit and cause the batteries to catch fire and possibly explode.

“In high-rate applications, safety is a bigger concern than under any other operating circumstances,” said Grey. “These materials, and potentially others like them, would definitely be worth looking at for fast–charging applications where you need a safer alternative to graphite.”

In addition to their high lithium transport rates, the niobium tungsten oxides are also simple to make. “A lot of the nanoparticle structures take multiple steps to synthesise, and you only end up with a tiny amount of material, so scalability is a real issue,” said Griffith. “But these oxides are so easy to make, and don’t require additional chemicals or solvents.”

While the oxides may only be suited for certain applications, Grey says that the important thing is to keep looking for new chemistries and new materials. “Fields stagnate if you don’t keep looking for new compounds,” she says. “These interesting materials give us a good insight into how we might design higher rate electrode materials.”"