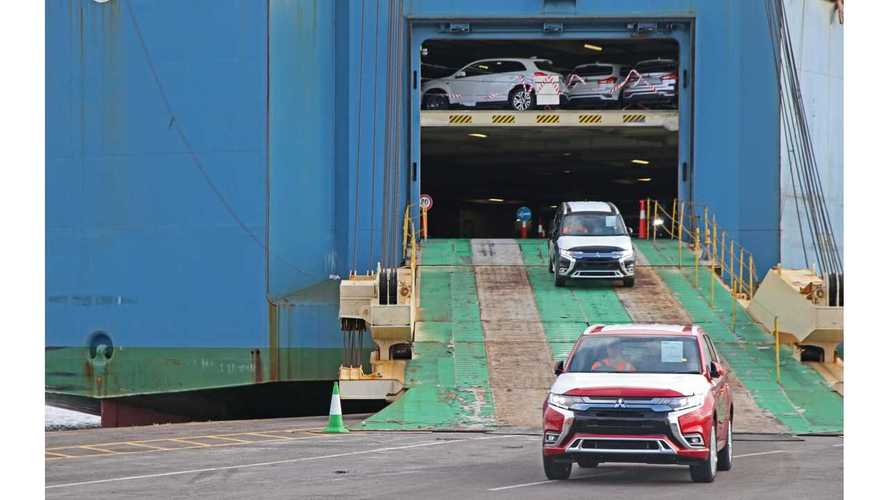 Mitsubishi is ready to begin sales of the new 2019 Outlander PHEV in the UK, its largest European market for the PHEV, as the first batch of around 400 copies hit the Bristol’s Royal Portbury Docks.

Deliveries are scheduled for August 1 and in the coming weeks, 2,000 more Outlander PHEV will be shipped from Japan as the upgraded 2019 model year sparked some additional interest.

The 2019 Outlander PHEV received a 13.8 kWh battery instead of 12 kWh used since its introduction several years ago. It enables it to go up to 28 miles (45 km) in all-electric mode, according to WLTP cycle.

Together with many other minor improvements, it should be enough to remain the top selling plug-in model in UK for some time, at least until the next-generation comes out at some point in the future.

Mitsubishi encourages that the 2019 Outlander PHEV will be more pleasurable to drive and quieter, with better performance, new features and a more appealing design.

"The new 2019 Mitsubishi Outlander PHEV has been engineered to meet the latest emissions regulations and comfortably qualifies for the government plug-in car grant thanks to its WLTP emissions of 46g/km and EV range of 28 miles, while also attracting the lowest possible BIK rate of 13 percent."

"The first examples of the new 2019 Mitsubishi Outlander PHEV will be delivered to UK dealers in the coming weeks prior to its on-sale date of August 1. UK pricing and specification will be announced on that date."

“The engineering improvements on the 2019 Outlander PHEV show a significant and progressive step forward and demonstrates Mitsubishi’s knowledge and expertise as one of the pioneers of plug-in hybrid technology. The Mitsubishi Outlander PHEV remains the UK’s most popular plug-in vehicle, and the revisions made for 2019 should help retain this status. Current year to date sales in the Ultra-low emission sector are up 27.7%, and this is an area of particular importance to us as a brand as we continue to meet consumer demand. The ongoing sales success of Outlander PHEV and our other SUVs has meant that we have been able to sustain a period of growth in the passenger car market, with sales up 13.6% year on year.