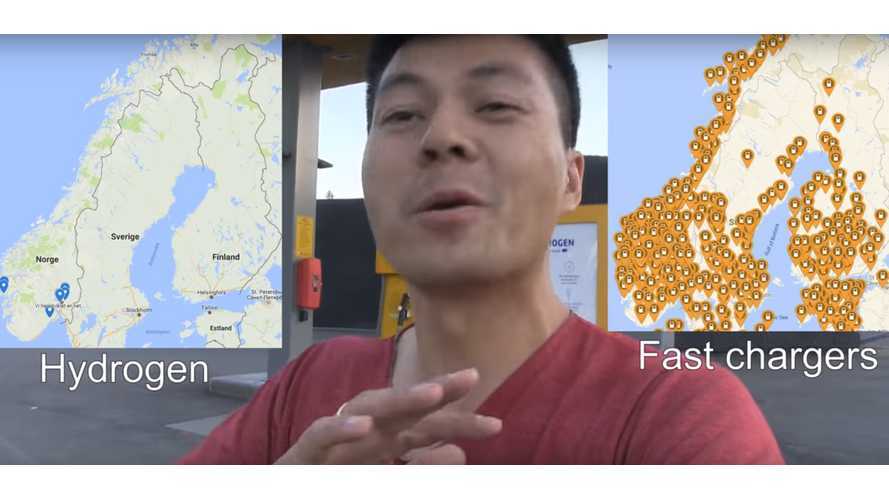 According to Bjørn, hydrogen fuel cell vehicles (HFCV) and refueling stations are rare breeds of bovine in Norway. While driving his Tesla Model X, he came across a station and decided to take a look.

Unlike most hydrogen in the United States that is derived from natural gas, this particular station produces hydrogen from electrolysis. So this hydrogen is cleaner than from some other sources. Of course, it is still energy inefficient, impractical and more expensive to fuel per mile than a plug-in vehicle.

While hydrogen refueling may be theoretically more convenient than charging an electric vehicle, that is only true when traveling. In practice, re-charging a battery electric (BEV) or plug-in hybrid (PHEV) wins out over a HFCV. Bjørn explains in his video:

Because fueling stations are so sparse, long-distance travel is currently out of the question for most HFCV owners. Although that may change in the future, the cars have a lot of hurdles to overcome before they can catch on. Fuel cell stacks have a limited life. Home refueling stations are technically feasible, but wildly expensive and impractical. Especially when every home with a power outlet can charge a BEV.

Check out Bjørn's video below:

Why hydrogen cars are bullshit

I crunch some numbers and explain why hydrogen cars are bullshit compared to gasoline cars and EVs.