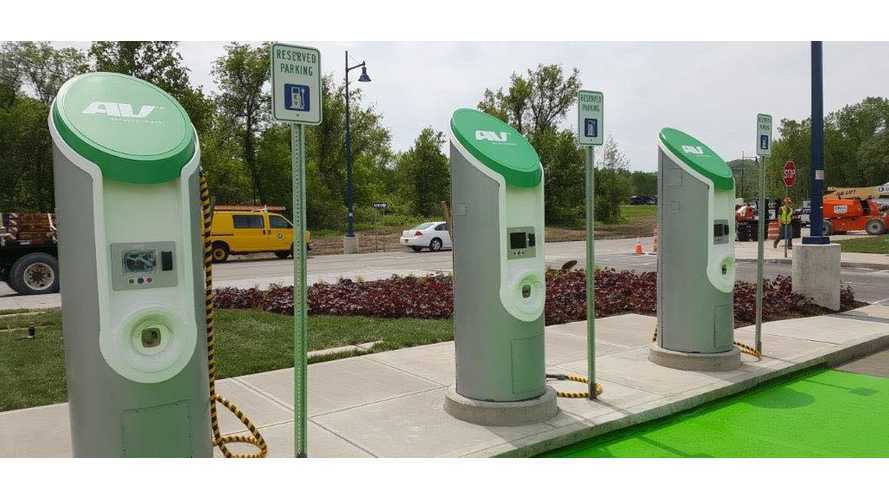 Currently, there are more than 2,000 charging stations in New York state, and by the end of this year it's expected to increase to 3,000

The latest program for the New York State Thruway envisions:

Governor Andrew M. Cuomo today announced a $4.2 million expansion plan to install more high-speed electric vehicle charging stations along the New York State Thruway. The plan will allow electric car owners to drive the length of the state without having to exit to recharge. The fast charging station expansion will enable more New Yorkers to take an active role in the Governor's goal to reduce greenhouse gas emissions 40 percent by 2030 by driving zero-emission vehicles.

"New York is a leader in the fight against climate change and by aggressively investing in clean transportation infrastructure, we are taking action to lower our carbon footprint," Governor Cuomo said. "By investing in the expansion of EV charging stations, this administration is working to reduce gas-powered vehicle emissions while making significant strides to establish a cleaner, greener New York for all."

As part of the Governor's Charge NY 2.0 electric vehicle initiative, the New York State Thruway Authority is partnering with the New York Power Authority to install the new fast-charging stations at Thruway service areas and Thruway-owned commuter parking lots over the next two years. The clean energy initiative will help the state achieve its goal of installing 10,000 charging stations by 2021 and further the Governor's Reforming the Energy Vision to build a cleaner and greener New York.

Since Charge NY was launched in 2013, the number of public charging stations has grown to more than 2,000 statewide. This new expansion plan puts New York within reach of the Governor's 2018 goal of 3,000 charging stations across the state. These infrastructure enhancements also support New York's leadership role in the multi-state, zero-emission vehicle plan that calls for electric vehicle sales to reach approximately 800,000 by 2025 in New York.

The new installations are an expansion of a trial program that brought fast chargers to four Mid-Hudson Valley service areas - Plattekill and Malden on the northbound Thruway, and Ulster and Modena on its southbound side, all in Ulster County. Over the next several years, chargers will be installed at the remaining 23 service areas.

The first phase of the EV charger expansion project involves installing two medium-speed (Level 2) charging stations at 13 Thruway-owned commuter parking lots. The Level 2 chargers, which take four to eight hours to charge, are geared to commuters who are able to leave their cars parked during the day.

The additional charging stations and associated signage are expected to build awareness about the benefits of electric vehicles. A 2016 market survey showed time to charge was a chief concern for survey respondents. These new high-speed chargers will help alleviate this concern for more drivers.

Most automobile manufacturers now offer an electric car model, and more than 30 new EV models are expected to be introduced by 2021, several with a range of more than 200 miles. The Bloomberg New Energy Finance forecast predicts that 54 percent of all car sales by 2040 will be emission free plug-ins.

Efforts to Further Support Electric Vehicle Usage Across the State

In another action intended to further encourage electric vehicle adoption, Governor Cuomo also announced that the State Public Service Commission has launched a groundbreaking initiative to accelerate electric vehicle usage, expand the number of electric vehicle-charging stations, and determine how utilities can help increase electric vehicle penetration in New York State. The effort is part of a broad-scale initiative to support Governor Cuomo's efforts to reduce emissions from the electricity and energy sectors along with the transportation sector. The PSC will consider the electric utilities' role in providing infrastructure and rate design to accommodate the needs and electricity demand of EVs. It will also explore cost-effective ways to build such infrastructure and equipment, and determine whether utility tariff changes will be needed in addition to those already being considered for residential customers.

As part of this coordinated state effort, NYPA, the State Department of Environmental Conservation, the Thruway Authority, and the State Department of Transportation, recently submitted a request for the PSC to timely modify electric rates for electricity customers that install fast chargers for electric vehicle recharging. Eventually, under the proposed rate adjustment, increased adoption of electric vehicles, and increased home and workplace charging, could increase revenue to operate and maintain the transmission and distribution system, allowing for a longer-term reduction in electricity rates for all ratepayers.

To make electric vehicles even more affordable and accessible, Governor Cuomo launched the state's Drive Clean Rebate program in March 2017. Administered by the New York State Energy Research and Development Authority, the program provides residents with a rebate of up to $2,000 for the purchase or lease of a new plug-in hybrid or battery electric car from participating new car dealers. More than 5,750 New Yorkers have received rebates in the past year for 35 different types of cars. Overall, most consumers received rebates of at least $1,100 for their new electric cars. This initiative played a central role in incentivizing the purchase of more than 10,000 electric cars in 2017, a 67 percent increase over 2016.

"By expanding the number of charging stations across New York under Governor Cuomo, we are getting closer to meeting our nation-leading goal to reduce greenhouse gas emissions 40 percent by 2030 from 1990 levels," said Richard Kauffman, Chairman of Energy and Finance, New York State. "By ensuring it will be easier and more convenient to charge up the car, we encourage even more New Yorkers to switch to clean and reliable electric vehicles."

"Newer cars with higher power ratings and larger batteries have made it more realistic for electric car drivers to go on longer trips - and that requires faster chargers," said Gil C. Quiniones, NYPA president and CEO. "Drivers will be able to travel from New York City to Albany to Buffalo and recharge along the way in only 30 minutes, and more commuters will be able to charge their cars at commuter lots when they are at work. We are excited that these additional charging options will encourage more widespread use of electric vehicles and also help further the reduction of greenhouse gas emissions."

Matthew J. Driscoll, Executive Director of the Thruway Authority said, "The New York State Thruway's 570-mile system is essential to the vitality of our state's economy by providing safe and reliable travel through the Northeast, and with these additional charging stations, we hope to soon be one of the greenest superhighways in the nation. We are proud to support Governor Cuomo's mission of getting more electric vehicles on the road through the Charge NY initiative."

Alicia Barton, president and CEO, NYSERDA, said, "The addition of new charging stations at the Thruway travel plazas and commuter parking lots will enhance the electric vehicle driving experience for the tens of thousands of New Yorkers who have already made EVs their transportation of choice, and for those who are switching to EVs in ever greater numbers. Governor Cuomo's aggressive agenda to fight climate change includes making clean technologies like EVs more accessible to everyday New Yorkers and this announcement is further evidence of New York's commitment to making clean transportation choices easier for consumers."