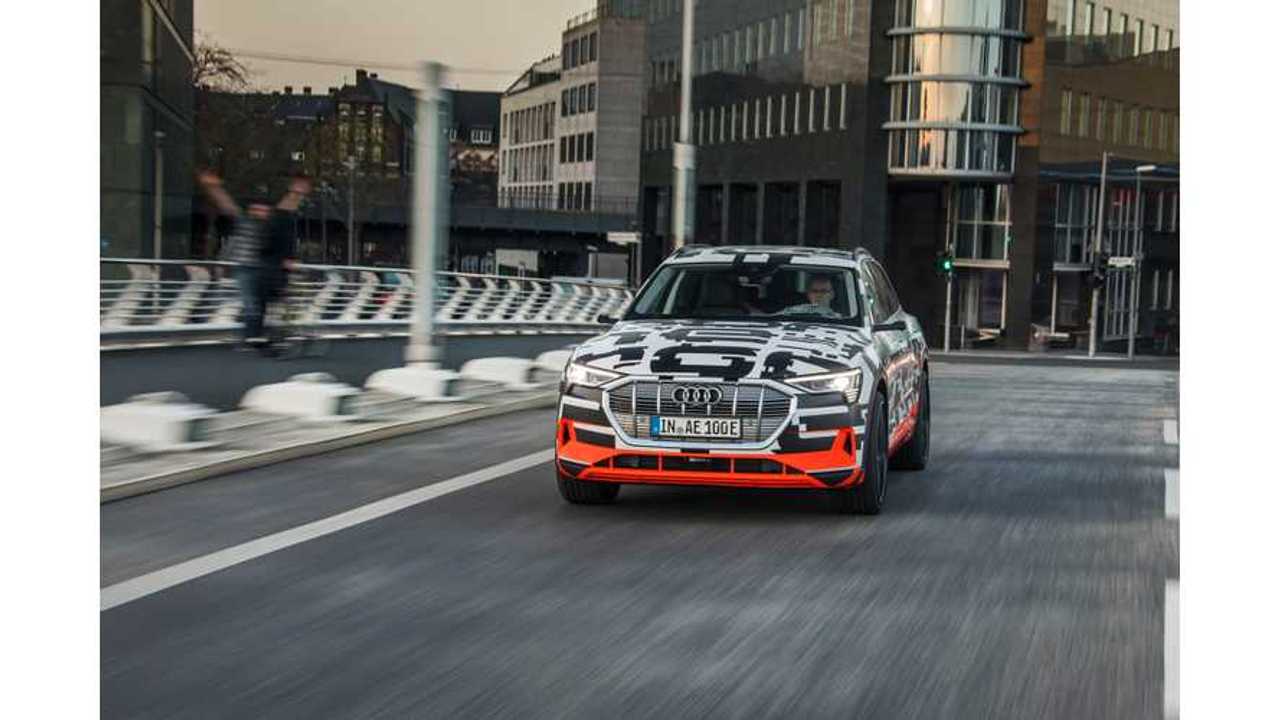 E-Tron GT coming in 2020 together with a new electric compact car.

Audi previewed the road-going E-Tron with a namesake concept back in September 2015 at the Frankfurt Motor Show and then introduced the prototype pictured here in March this year in Geneva. Now, the four-ring company is getting ready to unveil the final version. It will happen on August 30 on the occasion of the Audi Summit in Brussels, Belgium where the model will also be produced. The fully electric E-Tron crossover will usher in the company’s new ambitious EV plan to sell around 800,000 electrified cars per year by the middle of the next decade.

We already know a great deal about the model, including probably the most important fact: range. A couple of weeks ago, Audi announced the production version of the E-Tron will cover 248.5 miles (400 kilometers) in the upcoming Worldwide harmonized Light vehicles Test Procedure (WLTP), which will be significantly closer to reality than the optimistic NEDC.

It will be possible thanks to a large 95-kWh lithium-ion battery pack mounted within the vehicle’s floor and rechargeable in just 30 minutes by using a high-power charging station. Audi promises that by the end of the year, there are going to be almost 200 high-power charging (HPC) stations with six charging points each in Europe. These are part of a greater scheme to have 400 stations at intervals of 74 miles (120 km) on highways and important transport routes on the old continent by 2020.

When connected to a 400 volt three-phase outlet with a power of up to 11 kW, completely recharging the battery pack is going to take eight and a half hours. Audi will sell an optional connect charging system to double the charging power to 22 kW.

In 2019, the sleeker E-Tron Sportback will be added to Audi’s EV portfolio and it will be built at the same factory in Brussels. Looking into the company’s future, Audi Sport will roll out a stylish E-Tron GT in 2020 when Audi is going to introduce a new “electric model in the premium compact segment.” While the identity of the latter hasn’t been disclosed, one could speculate it will be an EV version of the next-generation A3.

Meanwhile, Audi has reiterated that later this year we will also get to see a hot SQ2, a China-only Q2 L, and the Q8 flagship SUV.

Year of new departures: Audi informs its shareholders about the company’s transformation

New production launches every three weeks, new segments and drive technologies, new organizational structures: Audi has started an extremely eventful and ambitious year. At this Wednesday’s 129th Annual General Meeting in Ingolstadt, the Board of Management informs the shareholders about the current course of business, the model and technology initiative, and the objectives of the Action and Transformation Plan as an enabler for the strategy “Audi.Vorsprung.2025.”

“2018 is a key year for Audi with an enormously high speed of change, that will gradually put us back on the offensive,” says Rupert Stadler, Chairman of the Board of Management of AUDI AG. “We will continue clearing up the diesel crisis and will restructure large parts of our global organization for the course we have set for the future. At the same time, we are approaching the climax of the biggest model fireworks in our company's history and are entering the age of electric mobility with the Audi e-tron.”

As the brand’s first fully electric volume model, the Audi e-tron SUV will have its world premiere at the Audi Summit in Brussels on August 30. With the rapid expansion of the portfolio of fully electric cars and plug-in hybrids in each model range, the company aims to sell approximately 800,000 electrified automobiles per annum by 2025. For the production version of the Audi e-tron prototype, customers will for the first time be able to book various functions flexibly online. In total, the brand aims to generate an annual contribution to operating profit of €1 billion with digital services via the myAudi customer portal by the year 2025.

Audi is installing a central product management unit reporting directly to the CEO to steer the planning, implementation and operation of digital products, and is thus establishing digital value added organizationally at the same level as the existing core business. For this purpose,

Audi is also developing an integrated IT platform for vehicle connectivity and digital services. By means of a shared high-performance backend, the models from Audi and the other brands of the Volkswagen Group will be usable compatibly; this means for example that customers’ settings and content will be smoothly transferred between the automobiles of the various Group brands.

“We want to have premium electric cars and digital services that are also attractive in economic terms. That is our clear ambition for the mobility of the future,” points out Alexander Seitz, Member of the Board of Management for Finance, IT and Integrity. “To that end, we are utilizing Group synergies significantly more effectively and are releasing resources for strategy projects with our Action and Transformation Plan.”

With its successfully started Action and Transformation Plan, Audi aims to achieve positive earnings effects totaling €10 billion by 2022 through reduced costs and new sources of revenue. Audi is systematically prioritizing the resources gained from efficiency progress for innovations with high customer relevance as well as Vorsprung durch Technik in the competitive arena.

In the current financial year, Audi is rejuvenating and expanding its model portfolio with more than 20 new market launches. The new Audi design language and the new, fully digital operating concept in the interior will be introduced in all segments, starting with the premium full-size class. Following the launch of the new A8 in late 2017 and the A7 in March 2018 in first markets, a new top model will come onto the market as of the middle of this year: the new generation of the A6. By 2020, Audi plans to increase its unit sales in the brand-defining full-size segment by about 50 percent. Before the end of this year, the two high-end SUVs, the Q8 and the Audi e-tron, will extend the Four Rings’ product offering in this prestigious segment.

Audi will launch new sporty SUVs also in the compact and midsize segments in 2018, thus significantly strengthening its market position for premium SUVs, for which demand is strong all over the world. In addition to the new Q3 generation, the sporty SQ2* will have its premiere in the coming months. In China, Audi SUVs will be available for the first time as long-wheelbase versions: the Q2 L and the Q5 L. By the end of 2019, Audi will launch a total of eleven new SUVs, including further models without predecessors such as the Audi Q4, which is to be launched next year.

At Lamborghini, this year features the market launch of the world’s first super SUV: The Lamborghini Urus (Combined fuel consumption in l/100 km: 12.3; Combined CO2-emissions in g/km: 279**) will be delivered to the first customers this summer. Before it is even in the showrooms, advance orders have been received for the model in just one month in the volume of the total production in 2018. Ducati is continuing the expansion of its portfolio this year with five new motorcycles, including two without any predecessors. The Ducati Panigale V4 is the first bike to put racetrack technology on the road in the form of a four-cylinder series-produced engine, and the Scrambler 1100 extends the scrambler series, which is particularly popular with younger customers.

The large number of model launches and phase-outs in the context of the Audi model initiative, which will be particularly intensive in the second half of the year, will at first have a negative impact this year. Further challenges will result in 2018 from industry-wide homologation requirements in connection with the changeover to the Worldwide Harmonized Light Vehicles Test Procedure (WLTP).

For full-year 2018, AUDI AG maintains its target of an operating return on sales within the strategic target corridor of 8 to 10 percent, despite its ambitious agenda and challenging conditions. The company anticipates deliveries of Audi automobiles at the record level of 2017, when 1,878,105 automobiles were handed over to customers. Revenue at the Audi Group should rise slightly from last year’s level of €60,128 million. As forecast in the current annual report, there may be considerable fluctuations in deliveries and financial key figures during the year.

*This car is not yet on sale. It has not yet been homologated and is therefore not subject to the 1999/94/EG guideline.** Fuel consumption and CO2 emissions figures given in ranges depend on the tires/wheels used.