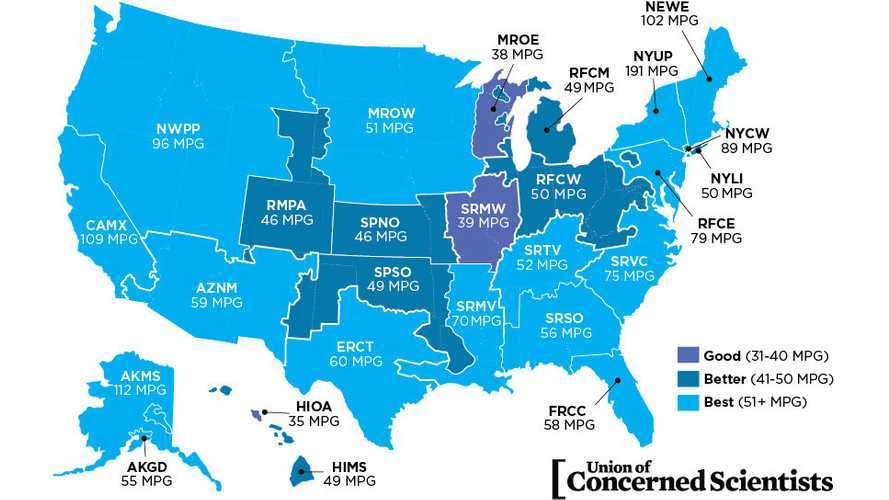 It's never been better than today, as electric cars are now cleaner than the average new gasoline car everywhere in the country - the report states - even where plug-ins are recharged from the dirtiest coal-dominated electric grid.

"The analysis, which looked at the latest data on power plant emissions, revealed the average electric vehicle on the road today emits so little in the way of global warming pollution that it's like driving a conventional car that gets 80 miles to the gallon.

Electric vehicles will continue to get even cleaner as more coal-fired power plants close in favor of wind and solar power, whose prices continue to drop. Coal already has fallen from providing 50 percent of the power on the grid to 30 percent. Renewables now provide 10 percent of America's electricity.

Electric car technology is improving, too. Looking at the most efficient electric models, 99 percent of Americans could drive cleaner on electricity than they would in a 50 mpg gasoline car."

A lot changed compared to the 2015 - compare similar graph:

Separately, the Union of Concerned Scientists notes that driving electric is also cheaper:

"Driving electric isn't just cleaner—it's cheaper, too. In another recent analysis, the Union of Concerned Scientists looked at electricity rates and gasoline prices in fifty of the biggest U.S. cities, and found that charging an electric vehicle can be cheaper than fueling a car with gasoline in each of the cities. The average driver can save nearly $800 a year by driving electric instead of on gasoline. With fewer moving parts, battery electric vehicles require less scheduled maintenance than gasoline cars, saving drivers even more.

American motorists have only just begun to see the advantages of electric vehicles, as the industry is less than a decade old. While electric vehicles are still a small part of the auto market, there are now 40 models available in the U.S., with automakers planning to introduce more. The trend is clear: the future is electric. As a greater segment of the public recognizes the advantages of these vehicles, more drivers will save at the pump as they reduce the risk of climate change."

Source: The Union of Concerned Scientists