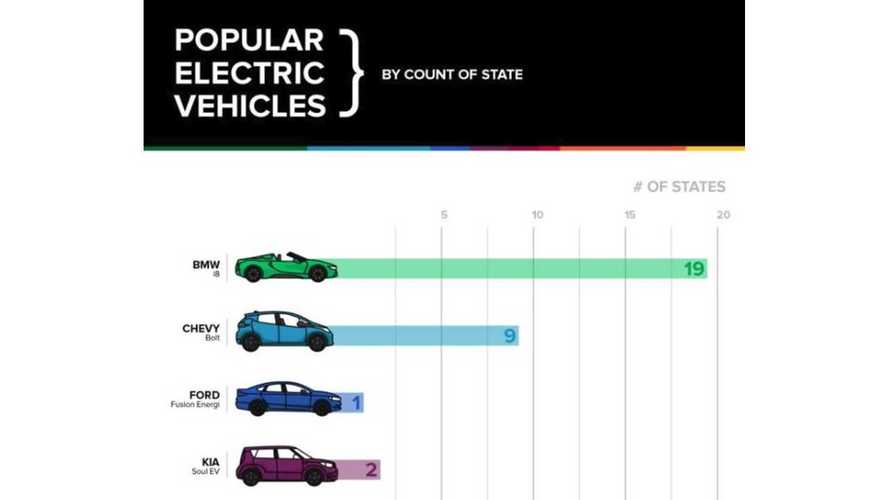 Texas-based Amigo Energy released an interesting comparison of the most popular plug-in cars by state, based on on-line search data.

The Most Popular Electric Cars by State (source: Amigo Energy)

For us, it was kind of surprising that in 19 states, the most often searched vehicle was the BMW i8 plug-in hybrid. It must be somehow related to the appearance of the i8 and maybe introduction of new versions of the Coupe and Roadster.

It seems more understandable that the Tesla Model S and Tesla Model X was most popular in 11 and 6 states respectively, while Chevrolet Bolt EV managed to score the lead in 9.

Another surprise is that the retired Mitsubishi i-MiEV was the most often searched plug-in model in two states (New York and Illinois), while the Nissan LEAF was on top only in... Hawaii. Even the Kia Soul EV was better than the LEAF, taking two states - Oregon and Washington. Ford Fusion Energi was most popular in Kansas.

One of the findings is that there is no correlation between car popularity and state median income, because anyone can search for a dream car, even if it's beyond ones financial capabilities.

The relation between actual sales and searches seems weak too.

"What makes certain EV models dominate over others? Is it a feature-packed resume? Pride in a particular brand? Or a sleek, progressive design?

The Most Popular Electric Cars by State (source: Amigo Energy)

For those who are keen on the BMW i8 (the sweeping preference of the South and most of the East Coast), it could be the sophisticated, sporty design and 3-cylinder Turbo engine that appeals to the plethora of Daytona enthusiasts in the region. Or perhaps it’s the four driving modes (Eco Pro, Comfort, Sport, and eDrive), which provide optimum performance through many different climates and types of terrain.

Drivers traversing rugged, mountainous landscapes in states such as Utah, Arizona, Montana, Minnesota, and Alaska might find the durability, extra seating and storage space, and incredible range (over 300 miles on a full charge) of the Tesla Models S and X more enticing than the fancier-framed BMW i8. Who could say no to a road trip-worthy EV?

There’s a good chance those seeking economy and practicality made the Chevy Bolt the top EV in places like Idaho, Wyoming, South Dakota, New Mexico, and Maine. With a 250 mile range on a full charge, it’s easy for locals to explore the beauty in these states while also enjoying the benefits their car has on the environment around them.

Then there are the outliers—the states scattered here and there who opt for different, lesser-known EV models. While California, like its population, is a melting pot of all the electric cars, the Pacific Northwest favors the Kia Soul EV; practical Kansas elects the Ford Fusion Energi, and New York and Illinois, both states with major, densely populated cities, are more interested in the Mitsubishi i-MIEV, a model that was actually discontinued in 2017. So while some top-selling electric cars prove dominant in certain regions, there really is no accounting for taste across the board."