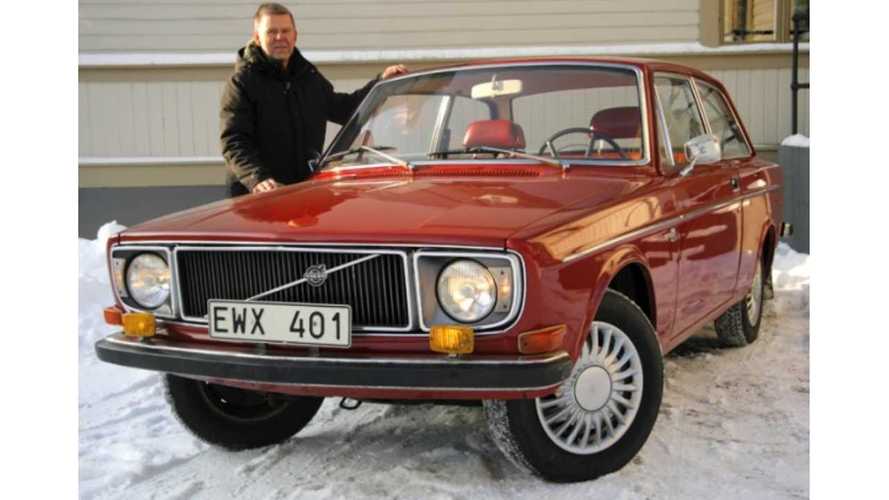 The Volvo 142 is a modest classic.

The 2-door variant of the 140 series, first built in 1966, it set the stage stylistically for the brand from then until now, eschewing, as it did, the curviness of its forebearers for a boxy look. If one were to consider converting a classic model from the Swedish automaker to run on electricity instead of gas, it might not be the first choice — a P1800 in either coupe or wagon form would be ours — but for Kjell Ekelund, it just made sense.

This was, after all, a vehicle that had been in the family since his father bought it new in 1972. Stored away for some 15 years, he decided to wake it from its peaceful slumber with electricity. He probably could have just restored the car with its original power plant, but thinking of his grandchildren's futures, he decided to go a cleaner way.

Unlike most conversions we see now, this one is old school. It uses a 7.5 kW (10 horsepower) motor mated to the classic's 4-speed manual transmission to help its small number of horses get up to speed, and there's no hi-tech battery modules ripped from a salvaged Tesla either. This, you see, is a true lead sled, meaning it relies on a collection of lead-acid to store its motivational energy. While they're ideal, weighing in at 250 kg (551 pounds) while providing for a mere 45 minutes of drive time, they were easy enough for the former Volvo foreman to source.

The whole conversion process involved about 300 hours of tinkering and, including the red paint job, cost a modest 60,000 Swedish kroner ($6769). To break it down a bit, the batteries cost 25,000 SEK ($2820), while the motor and converter set him back 20,00 0 SEK ($2,256). Currently, it enjoys a sedate life ferrying its owner about town and making appearances at the occasional local car show.