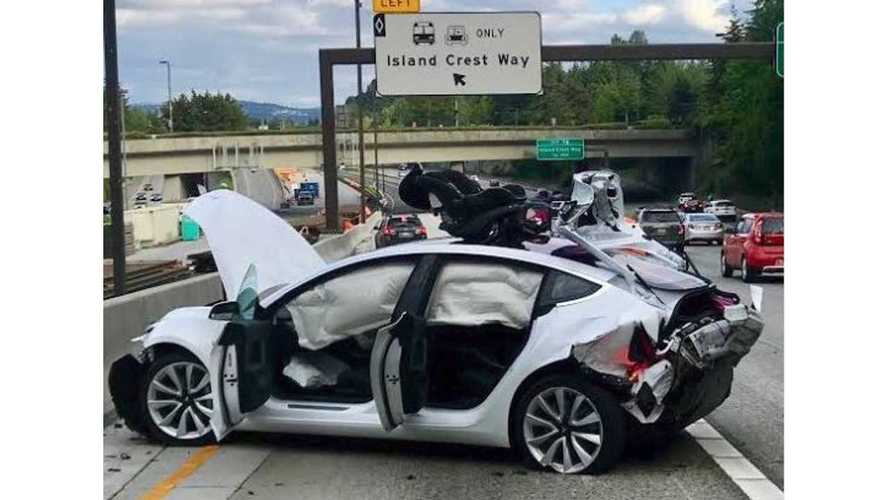 It's unwise, illegal and frankly quite stupid to race other cars on public streets.

Luckily, everyone was okay this time around, but the Tesla Model 3 is surely totaled.

Was cruising along the i-90 tunnel in Seattle, WA on mercer island with my wife and 2 kids, when I hear some vehicles approach at high speed from behind. Then suddenly I hear a screeching sound from a car breaking hard, and then a car slams into my rear end - hard. I was going 65, so that vehicle must have been going significantly faster. From there I lose control of the car, and the car spins out of control, hitting the freeway divider wall all the way on the other side of the freeway 4 lanes across, and then bouncing back all the way back to the other side of the freeway and hitting that wall before coming to a stop.

Thankfully the model 3 performed miraculously, crumple zones compressed, airbags deployed, no fire after the accident, and no one in my family seems to be seriously injured.

Still processing what just happened and getting all the facts from the police (there may be a criminal case against the person who hit me), but any tips and things to watch out for as I go through the insurance process?

Below is a Tweet from our friends at EV News Daily:

This is so scary - Camero & BMW racing on the road, one hits a Model 3.

Thank goodness this man & his kids are OK. Thank you @elonmusk & @tesla for building ‘em tough.

Child seat on the roof is haunting. Hope police prosecute the arse off the racers.https://t.co/BOm7tZJ0kC pic.twitter.com/haThKQztRm

It appears as though at least one witness posted on crash too. It seems a BMW M4 was racing a Chevy Camaro SS. The Camaro didn't slow down in time. It salmmed into the rear of the Model 3, causing the car to lose control at speed.

The occupants of the Tesla Model 3 are all okay, though they did suffer some minor injuries and an experience that they'll not soon forget.