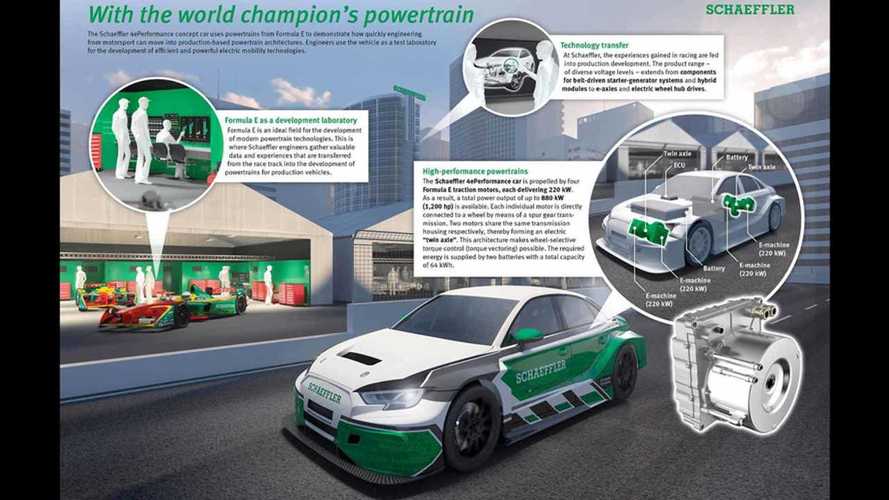 Schaeffler shows off the adaptability of Formula E tech by cramming it into an RS3 Sedan.

Schaeffler is a major sponsor of the Audi Sport ABT team in Formula E, and for the wild new 4ePerformance project, the automotive supplier manages to cram the powertrain of the FE01 racer into an Audi RS3. The result is an electric touring car that packs an incredible 1,180 horsepower (880 kilowatts). With so much power, the 4ePerformance can hit 124 miles per hour (200 kilometers per hour) in less than seven seconds.

In addition to being quite quick, the concept should be quite a sharp handler around a circuit. A gearbox at each axle controls two electric motors, and this setup allows for torque vectoring to tweak the cornering in the middle of a curve. Separate batteries at the front and rear provide a total output of 64 kilowatt hours.

"For Schaeffler, this vehicle is a test laboratory on wheels thanks to its free scaling options for the drive power," the Simon Opel, the company's Director of Special Projects Motorsports said in the model's announcement. The company doesn't ever intend to take the 4ePerformance racing because it's just a test mule for figuring out how to apply Formula E technology to a mass-produced vehicle. This undertaking was simply a proof on concept that creating such a model was possible.

Formula E is currently in a state of transition as new automakers like Mercedes-Benz and Porsche prepare to enter the series and teams prepare for the new Gen2 car for the 2018/19 season. The latest racer will have larger batteries that will eliminate the necessity for drivers to swap cars in the middle of the race. The most energy-efficient driver will now receive an extra point at each event.